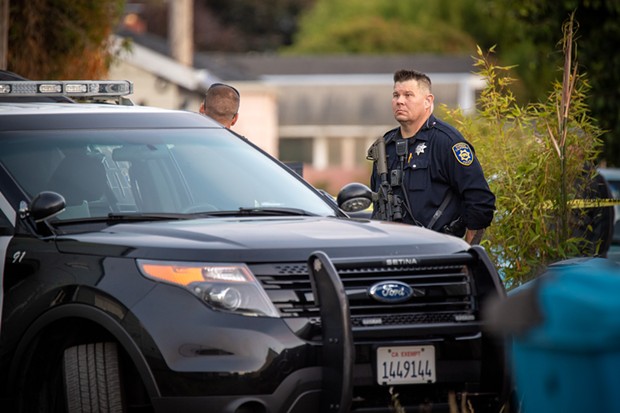 Pursuant to a new state law, the Eureka Police Department has released video footage and audio recordings from the tense July 23 standoff that ended with officers fatally shooting 51-year-old military veteran John Karl Sieger, who was reportedly drunk and suicidal when he allegedly raised a pistol at officers, causing them to open fire.

The video appears to clearly show Sieger point a handgun at nearby officers while exiting his backyard before he is shot, while the audio recordings indicate the woman who called 911 to report Sieger’s suicidal behavior also told police she’d received a text message from him during the standoff in which he threatened to shoot any officers who saw him.

As of July 1, 2019, Assembly Bill 748 requires police departments to release video and audio recordings that capture officers firing their weapons at a person within 45 days of the shooting, so long as releasing them wouldn’t “significantly interfere with a criminal or administrative investigation.”

The records released Friday include about an hour of video footage pulled from the body camera of one of the four officers who fired their weapons in the shooting, officer Patrick Bishop. Footage from officer Andrew Endsley’s camera — which reportedly does not capture the shooting that occurred in a matter of seconds because it was obscured by a window sill at the time — will be released but is currently being redacted, according to EPD Records Supervisor Amanda O’Neill.

The two other officers who opened fire on Sieger — Brian Wilson and Sgt. Jon Omey — were wearing body cameras but their batteries both died during the incident, according to Chief Steve Watson.

Bishop’s camera was also malfunctioning — repeatedly shut off by being hit with the butt of his rifle — but the footage was recovered via an “after-the-fact” feature that allows the department to pull footage from a camera even if it isn’t turned on during an incident, though such “after-the-fact” footage doesn’t have audio.

The footage from Bishop’s camera shows him first setting up at what appears to be the second-story window of a neighboring residence, from which he’s trying to see into the backyard where Sieger was, before he moves and sets up behind a patrol car in an alley way behind Sieger’s backyard fence. It’s from here the camera captures a shirtless Sieger exit his backyard and take two or three steps toward officers before raising his right hand and pointing what appears to be a black pistol at him. Officers then open fire, combining to discharge 27 rounds, eight of which hit Sieger. The officers then continue to shelter for about a minute before moving in behind a ballistic shield, ultimately finding Sieger lying face down with what appears to be a black handgun lying a few feet away.

The audio recordings released from the incident indicate it began when a woman called 911 to report that Sieger, who she described as her friend, was “extremely intoxicated,” “very depressed” and had just sent her a picture with “a bunch of empty beer cans,” a whiskey bottle and a black pistol.

Then, there were two instances when he relayed threats to officers, saying at one point he would shoot them if he saw them and at another, “I respect cops and don’t force me to kill any of them.”

The recordings also indicate another woman called dispatch saying she had known Sieger for a long time and could “talk him down.” This information was passed on to the commanding officer at the scene, though it’s unclear if the woman was put in touch with Sieger.

The recordings also indicate officers contacted Sieger directly, though he quickly hung up. A mental health clinician was also brought to the scene to speak directly with Sieger, though recordings of that conversation were not released.

The police radio calls released Friday also illustrate that police initially did not know if anyone was at the residence with Sieger, and used social media posts and cell phone records to track down and contact his son and wife. Both were inside the residence at the time and left through the front door to meet police down the street while Sieger was in the backyard. It’s unclear if they were aware of Sieger’s state, but his wife told officers she believed there were no firearms in the house and he only had access to a pellet gun. At another point in the standoff, the recordings indicate police had Sieger’s other son call him in an effort to get him to calm down.

Watson said police considered standing down and leaving the scene, hoping Sieger’s mental state would improve and things would de-escalate. But then officers heard three gunshots come from Sieger’s backyard and decided leaving the scene could put other people in danger.

In an obituary published in the Lost Coast Outpost, a friend of Sieger’s wrote that he suffered from chronic pain from a pair of helicopter crashes during his time in the Marines and a workplace injury, as well as post traumatic stress disorder.

The recordings indicate this pain was on Sieger’s mind as paced in his backyard and police staged nearby.

“I told him … to talk to the officers, ‘They need to know you’re OK,’ um and that I’m staying on the line until the officers can physically see him,” Sieger’s friend told dispatch. “He said, ‘I can’t,’ and then he said, ‘I just am done with the constant daily pain.’”

That was at 6:24 p.m. Almost exactly two hours later, at 8:22 p.m., an officer advised over the radio, “He’s looking over the back fence and I think he may have just seen me. He’s opening the gate. He’s exiting.”

To watch the video and listen to the audio recordings referenced in this story, visit EPD's transparency portal website here.