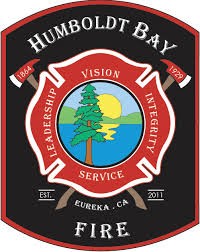 Humboldt Bay Fire responded to three incidents in Eureka on Saturday, including a residence, a commercial fire and a fire that engulfed a large homeless camp near the county Office of Education building.

No one was injured at any of the scenes.

The first, a shed fire on the 800 block of O Street, came in around 8:25 a.m. and was determined to be caused by a knocked over candle. The main house suffered some heat damage and the shed was a total loss, with total losses estimated at $7,500.

At 6:22 p.m., the commercial call came in reporting trash was on fire at the Humboldt Waste Management Authority’s transfer station on W. Hawthorne Street.

According to a release, the first units on scene reported heavy black smoke visible building and a second commercial alarm was requested as crews forced their way into the building to attack a large pile of burning trash.

Staff from HWMA arrived later and assisted in the effort by using a loader to spread the burning garbage. The building also had an automatic fire sprinkler system that helped keep the fire from spreading before Humboldt Bay Fire crews arrived.

The release states the cause is undetermined but the building was undamaged. The last fire call came in about an hour later for a fire in a greenbelt area on the 800 block of Myrtle Avenue, where crews found the camp on the fire. No one was found at the scene, according to the release.

On Saturday September 5th, 2020, Humboldt Bay Fire responded to three significant fire-related incidents throughout the day. The first incident was a reported Structure Fire at the 800 block of O St in Eureka.

The fire was reported at 0825hrs and HBF responded with 2 Chief Officers, 3 Engines and One Truck. The first arriving engine reported a detached shed to the rear of the residence fully involved in fire and threating the residence and neighboring properties. The fire was controlled in 30 minutes and the shed was complete loss. The residence suffered minor heat damage.

Fire crews remained on scene for 2 hours to completely extinguish the fire. Other neighboring properties were not damaged and the cause of the fire was determined to be accidental due to candle be knocked over inside the shed. Damage is estimated at $7,500 and there were no civilian or Firefighter injuries.

The second incident was a reported Commercial Structure Fire w/ sprinkler system activation @ 1059 W. Hawthorne St. (Humboldt Waste Management Authority). The fire was reported at 1822hrs and HBF responded with 2 Chief Officers, 3 Engines and One Truck. The first arriving units reported a large commercial building with heavy black smoke visible throughout the building and venting from the roofline.

A Commercial 2nd alarm was requested which brought in 4 additional engines and one Truck company from neighboring Fire Agencies. Fire Crews forced entry into the large building that contains the waste transfer facility and extended hose lines through the black smoke and began to extinguish a large pile of garbage that had ignited inside the building. Multiple master streams and hose lines were used to knock the fire down and the Mutual Aid resources responding to the fire were released from the fire scene and covered Humboldt Bay Fire’s Jurisdiction for the duration of the incident.

Staff from HWMA arrived and assisted Firefighters with extinguishing the fire by using a loader to spread apart the pile of garbage burning allowing Firefighters to completely extinguish the fire. The building’s automatic fire sprinkler system activated and kept the fire from spreading prior to Humboldt Bay Fires arrival.

Fire crews remained on scene for 1 ½ hours to completely extinguish the fire and assist HWMA staff with placing the automatic fire sprinkler system back in service. The cause of the fire is undetermined and the building suffered no fire damage. There were no civilian or Firefighter injuries.

The third incident was a reported Fire in the greenbelt area to the rear of the Humboldt County Office of Education located at the 800 block of Myrtle Ave. The fire was reported at 1936hrs and HBF initially responded with one Truck Company.

The first unit arrived in the area and reported a fire deep in the greenbelt area with multiple small explosions. HBF additionally responded with 1 Chief Officer, one Engine Company and one Water Tender. Access to the fire was located through a locked gate off Myrtle Ave and fire crews discovered a large transient camp fully involved in fire approximately 400ft from the roadway. Fire Crews remained on scene for 1 hour to extinguish the fire. There were no occupants located near the fire and the cause of the fire is undetermined.

There were no civilian or Firefighter injuries. Humboldt Bay Fire would like to remind the public to call 911 immediately if you see smoke especially with the current weather conditions we are experiencing locally.