Last Night, Firefighters Fought a Battle for the Community of Ruth as They Conducted a Firing Operation on the Hopkins Fire in the Massive August Complex 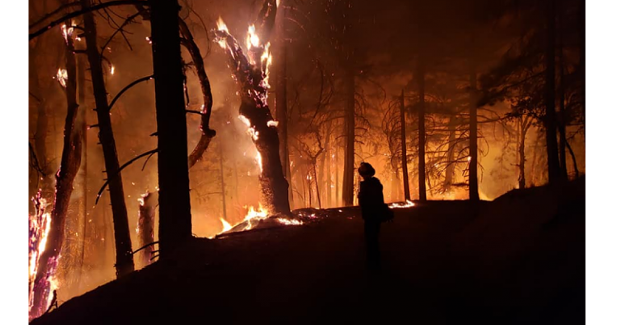 Last night, south of Ruth Lake in the Six Rivers National Forest a battle took place to save the little town of Ruth and the scattered structures in the area.

Tom B. Stokesberry III, Captain in the U.S. Forest Service, captured photos and video of the experience and posted on Facebook. With his permission, we’re providing the story to our readers.

“Last night my Division A/C/E did a firing operation to secure the 02S02 Road or “Cedar Camp Rd,” he wrote. “If we could accomplish this, it would push the fire back east and away from the community of Ruth.”

The small team of firefighters worked in the dark and smoke while crowded by flames to burn out the vegetation that would otherwise provide fuel for the Hopkins Fire to grow and allow it to head towards the town of Ruth and destroy it.

The crew did it!

“We were successful with the upper half of [Cedar Road] and handed it off to the Trinity Hotshots for day shift to complete,” he explained.

Then he added, “Feeling proud of my crew! An outstanding job!!”

The community of Ruth is a little safer today.