After working yesterday to protect structures and utilities from encroaching blazes, fire crews have pivoted toward a larger containment strategy in an effort to tame the Slater Fire that’s straddling the California-Oregon border along Highway 199 northeast of Crescent City.

“Along the Slater Fire’s northwest side in Del Norte County, the focus remained on point protection yesterday, primarily along Highway 199 from Gasquet to the Collier Tunnel,” and update from the U.S. Forest Service states. “The fire is currently hung up at Oregon Mountain Road and backing into Knopki Creek, so there is currently little movement along the southwest edge in this area. … On the south end of the Slater Fire, favorable weather conditions slowed fire activity significantly yesterday and overnight. However, the initially hot and fast moving fire weakened trees in the burn area. Falling snags along (State Route) 96, some of them very large, pose a risk to firefighters and anyone else nearby.”

Highway 199 remains closed in both directions from Pioneer Road in Gasquet to the Oregon state line.

The plan today is to begin firing operations along the fire’s eastern edge to protect structures in the Thompson Creek area while scouts look for opportunities to contain and control the fire’s spread downriver, where it is approaching State Route 96, according to the update. 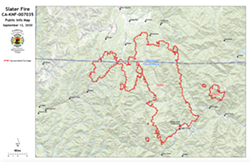 Crews are also working to construct a fireline between Seiad, a small town east of Happy Camp and about 15 miles south of the Oregon border, and the Devil Fire, which officials expect to soon merge with the Slater Fire burning to its west.

The U.S. Forest Service has firefighting aircrafts standing by but they have so far been unable to contribute much to the effort as heavy smoke has limited visibility, making overhead flights unsafe. A bit of good news is that moisture levels rose overnight and are expected to rise further today, dropping the “probability of ignition” 40 to 50 percent.

Winds out of the east have pushed smoke impacts from the Slater and Devil fires westward to the coast, where it’s mixing with smoke from the Red Salmon Complex and August Complex blazes, all combining to create very unhealthy air quality conditions throughout the North Coast. (Read more about that here.)

Evacuation orders remain in effect for most of Happy Camp, with warnings issued for Gasquet, Kerby, Cave Junction and O’Brien, Oregon.