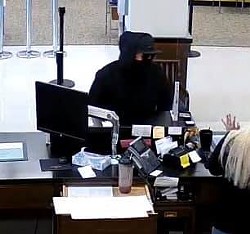 The Eureka Police Department is investigating a bank robbery that occurred just before 1 p.m. on the 2800 block of F Street, with two suspects sought.

According to a Facebook post, the two suspects were described as wearing masks and dark clothing and may have left the scene in a newer model white Ford pickup, with a license plate that possibly begam with 49.

They are considered armed and dangerous, the post states.

Anyone with information is asked to call the Eureka Police Department at (707)441-4044.