A 30-year-old man who barricaded himself in a McKinleyville apartment last night was taken into custody early this morning after the SWAT team made entry on a search warrant, according to the Humboldt County Sheriff’s Office.

The 26-year-old woman who was being held inside was able to get out safely before the team went in.


The Humboldt County Sheriff’s Office is bringing the BearCat and SWAT to a situation on Fischer Avenue off of School Road in McKinleyville after a man began holding a woman hostage this evening.

About 7:10 p.m., law enforcement began gathering in the area. Reportedly the male has been making suicide by cop statements and has barricaded himself and the hostage in a home “with an extensive amount of furniture,” according to a report over the scanner.

About 7:30 p.m., the dispatcher told officers that the “female was begging to leave.”

Neighbors are reporting getting a reverse 911 or texts saying, “[There is] Active Law Enforcement activity nearby. remain indoors and shelter in place. Stay clear of windows and doors. We will notify once there is an all-clear.”

Please remember that information gathered from initial reports is subject to revision as more facts become available. We will be updating as more information comes in.

UPDATE 8:10 p.m.: The Sheriff’s Office is requesting that the CHP put up a roadblock at School Road and Hwy 101.

UPDATE 8:13 p.m.: Photos from Dean Troutte who says he can hear a loudspeaker from the apartment building in the first photo: 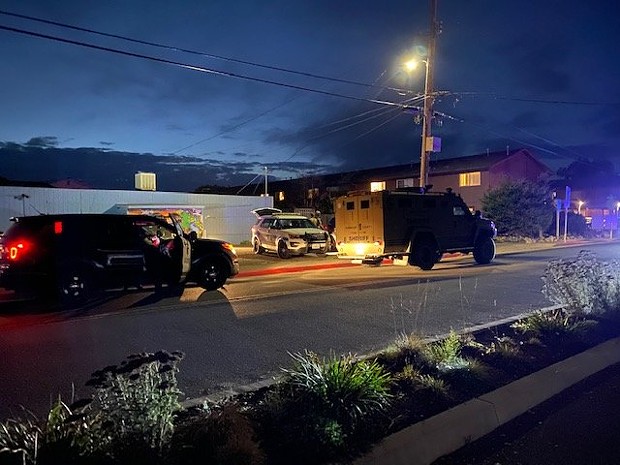 UPDATE 8:19 p.m.: The woman attempted to leave by the back door. The male prevented her from leaving.

UPDATE 8:32 p.m.: Lloyd Snyder, who is visiting a local resident, says the male let the female out through the front window and one of the SWAT team members is escorting her to a local market where more personnel are gathered. “The guy is hanging out the upstairs window right now saying to shoot him,” Snyder told us.

UPDATE 8:35 p.m.: Snyder tells us the man is throwing items out of the upstairs window.

Video of the BearCat arriving by Dean Troutte.