by Kali Cozyris and Kym Kemp 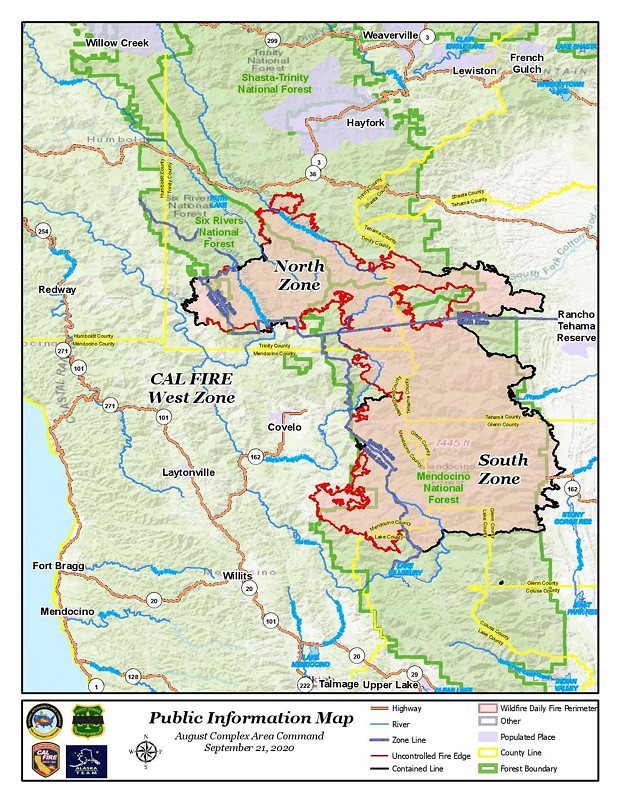 The Humboldt County Office of Emergency Services reports an evacuation warning has now been issued for areas east of Alderpoint Road to the Trinity County border and south of Showers Pass Road to Mountain Creek due to rapidly changing fire conditions in the August Complex North Zone.

Here is the Trinity County Sheriff’s Office’s alert: “Per the Trinity County Sheriff’s Office and Trinity County Office of Emergency Services, the entire area of Ruth Lake and the area of Lower Mad River Road from Sheriff’s Cove to Highway 36 is now under an Evacuation Order. Highway 36 is now closed to through traffic from the Mad River Road to Highway 3. This is due to Increased fire activity in your area. People are asked to safely leave the area. People who evacuate and need assistance can contact the American Red Cross at 530-276-8034. While leaving the area use caution as emergency vehicles assisting with evacuations, structure protection and fire suppression efforts will be on the roadways.”

An evacuation warning has been issued in Humboldt County for areas east of Bell Springs Road, to Trinity County line and south of Pipe Creek to Mendocino County line due to the August Complex fire burning in neighboring Trinity and Mendocino counties.

A change in weather conditions beginning today is expected to increase activity for the various fires burning across the region. Smoke accumulation and strong winds may also push smoke west and southwest to the coast.

The fire complex, burning about 8 miles northeast of Willow Creek, saw an overnight increase in its perimeter as it spread toward the northeast and southwest. Today crews are preparing for anticipated changes in weather conditions and repositioning crews along the south and south east flanks to protect the Hoopa Valley Reservation, Willow Creek, Hawkins Bar and adjacent communities.

"Red Flag Warning: Hot, dry, and breezy weather begins today, with warming and drying expected through the week. Breezy northeast winds may result in improved burning conditions, with increased fire behavior expected along the southeast flank of the fire. Throughout the fire area, interior islands may burn and fire will continue backing down slopes. This is likely to produce more smoke accumulation in several local communities," today's update reads.

Crews on the Slater Fire have completed their work near Gasquet, so they moved to the southside of the fire on Highway 199, according to today's update. More firefighters and engines moved to the northernmost part of the fire to continue mopping up, and firefighters continue to widen control lines around the fire to protect communities, forests and other resources. Crews on the Devil fire have made good progress on the southeast side of the fire and are continuing to build line along the southwest side.

For more, read the update here.

"The August Complex West Zone has burned 104,836 acres, spans approximately 195 miles of fire line and is 70 percent contained with more than 1,700 firefighters battling the fire from the air and the ground. In preparation for the forecasted heat and high winds, firefighters have been working diligently to improve and widen containment lines across all 195 miles of fire line, actively performing direct fire attack and mop up where fire conditions safely allow. Very large air tankers (VLAT) capable of carrying 9,400 gallons of fire retardant have been utilized to strategically drop fire retardant and further strengthen containment lines," this morning's update states.

Air Quality: No air quality advisories issued for today. Good air quality is expected for the most part with Southern Humboldt seeing 'Good' to 'Moderate' conditions that may worsen. The coast could see potential smoke if smoke production increases from the fires and the winds force it southwest and west. For more, read today's air quality PSA from North Coast Unified Air Quality Management District below:
See related PDF NCUAQMD_PSA_for_9-27-20.pdf