The Eureka Police Department is asking for the public's help in identifying the driver who struck a pedestrian during a Breonna Taylor demonstration in front of the courthouse on Sept. 24.

The EPD is also urging the driver to contact its office to provide a statement and for the pedestrian to call to give an update on her injury and provide a detailed statement.

Last week, EPD stated that a preliminary investigation seemed to indicate "the pedestrian may have placed herself in the path of the vehicle at the time of the collision."

(Read coverage from the night of the demonstration here.)

According to today's news release, the truck involved appears to have had a male driver and a female passenger.


"EPD will investigate this incident thoroughly to the fullest extent possible, analyzing the actions of both the driver and the pedestrian," the release states. However, the identification and full participation of all involved parties is crucial to this process. 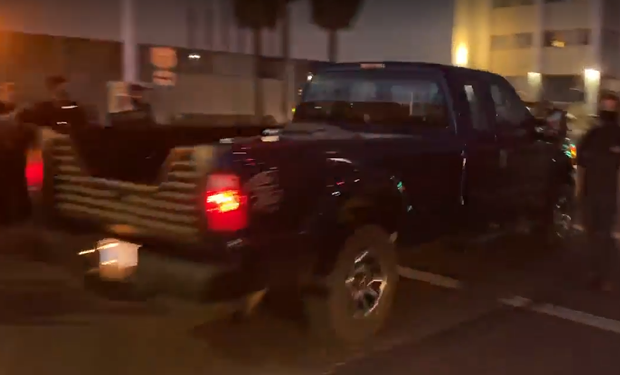 Read the EPD release below.

The Eureka Police Department (EPD) is seeking the public’s assistance to further our active investigation into the September 24th vehicle vs pedestrian incident on 5th Street, which occurred during a demonstration. Identification of the involved driver is needed as well as further contact with the pedestrian.

The vehicle is described as a dark blue Ford F-250 with an aftermarket v-gate style tailgate. At the time of the incident it appeared to be occupied by a male driver and a female passenger. Anyone who can provide further information on the vehicle and/or occupants is asked to contact EPD. We urge the driver to call us directly to provide a statement. All calls can be directed to Captain Brian Stephens at (707) 441-4087.

Additionally, EPD has made multiple attempts to contact the involved pedestrian to obtain an update on injuries sustained and a detailed statement. The pedestrian is also urged to call Captain Stephens at (707) 441-4087. EPD will investigate this incident thoroughly to the fullest extent possible, analyzing the actions of both the driver and the pedestrian. However, the identification and full participation of all involved parties is crucial to this process.