Weather conditions allowed the Red Salmon Complex to grow on the eastern flank of the fire, with firefighters concentrating on structure defense in the communities along the South Fork Salmon Road, Miller Ranch and Denny.

Evacuation warnings remain in place for Forks of Salmon and Denny.

Smoke from the fire and others in the region is creating Hazardous air quality conditions in the Hoopa Valley, which is expected to persist for another day and may interfere with air support flights.

“Additional crews, dozers, and engines have arrived to aid in efforts to protect communities and contain the fire. In all areas of active fire movement, firefighters are scouting possible fire control lines and will construct them as needed,” today’s update states.

Read the entire update at the bottom of the story. 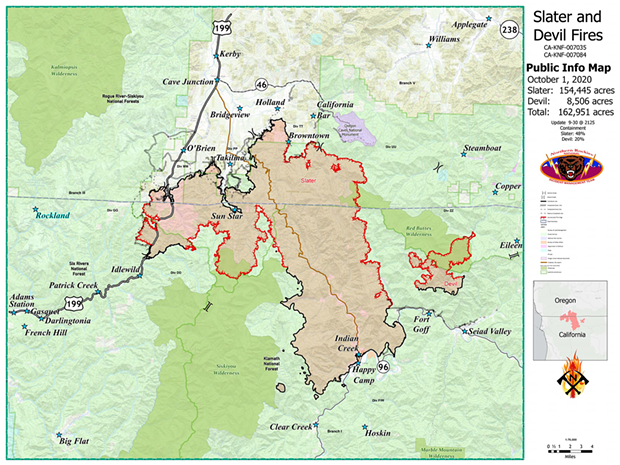 Firefighters are making progress on the fire line and concentrating on mop-up efforts around Happy Camp as well as securing line from Highway 199 into the Illinois Valley, according to today’s update.

On the Slater Fire, crews are working to connect 240 miles of line around the blaze and on the Devil Fire efforts are focused on the southwest west edge, mop up work and securing the fire’s edge.

“Winds in high terrain could reach up to 20 mph later in the week, with the potential to increase fire activity,” the update states.


Weather and Fire Behavior: Warm and dry with areas of smoke. Temperatures range from the 70s in higher elevations to 80s in the valleys. Smoke from this and other fires may persist for several days. Intensity of fire behavior will moderate with smokey conditions. If air clears, fire activity could increase due to low humidity and warmer temperatures. Yesterday: Continued dry conditions caused fire growth along much of the eastern flank of the fire. Firefighters concentrated on structure defense (assessing structures, installing sprinklers, etc.) in communities along the South Fork Salmon River Road in the northeast, and Miller Ranch and Denny in the southeast. On the west flank (Colgrove Branch of Mill Creek) crews laid firehose to aid in securing fireline around the 100-acre slopover. Today: Additional crews, dozers, and engines have arrived to aid in efforts to protect communities and contain the fire. In all areas of active fire movement, firefighters are scouting possible fire control lines and will construct them as needed. Aircraft are available to assist ground crews, however, flights may be grounded due to smoky conditions.

Along the eastern flank of the fire from north to south: crews continue to secure and hold Knownothing Creek, provide structure defense for communities along the South Fork of the Salmon River, and are completing a fireline along the north/south ridge from Cecil Lake to Cecilville road.

Firefighters continue to provide structure defense for Denny, Miller Ranch, and historical features within the East Fork of New River. On the south and west flanks of the fire crews are holding and securing current fireline and improving a secondary along Lone Pine Ridge to protect the Hoopa Valley Reservation, Willow Creek, Salyer, Hawkins Bar, and adjacent communities.

Evacuation Warnings remain in place for Forks of Salmon (Siskiyou County Sherriff’s office 530-842-8300) and Denny (https://www.trinitycounty.org/OES). All residents and visitors near the fire should be prepared to evacuate.

A Temporary Flight Restriction (TFR) is in place over the entire Red-Salmon fire area. Over the next 24 hours, smoke impacts in and around the Hoopa Valley are expected to reach Hazardous levels and an air quality alert for the area will be in effect until tomorrow.

Residents are asked to stay inside as much as possible.

Other areas of the region — including Orleans. Weitchpec, Willow Creek, Garberville and Bridgeville — are expected to see Unhealthy to Very Unhealthy conditions with the possibility of Hazardous in the same time period.

Crews are continuing to make good progress on the fire line, focusing on mop-up efforts around Happy Camp and securing line from Highway 199 into the Illinois Valley.

Hot, dry and smoky weather is expected to persist, with smoke drifting up from numerous fires in Northern California.

Slater Fire: Crews are working to connect more than 240 miles of fire line around the perimeter of the Slater fire. Firefighters will be continuing mop-up and patrols in the areas around Happy Camp in the south and the Illinois Valley to the north. Lines are holding well in these areas, and crews will be doing repair work for the communities in the area.

Hot spots have been challenging firefighters on the western and eastern flanks, and both areas could see increased fire activity in the next couple of days, as hot and dry weather is predicted. Hot spots have been detected along both sides, and crews will be working to put in line and strengthen existing ones. Mop-up efforts will continue near Idlewild.

On the east side, rough terrain has been an added challenge for crews. With smoky conditions, aircraft has not been an available resource. Ground crews are working along Greyback Road in the interior of the fire to mitigate hazardous trees and will continue this work into Thursday. Mop-up efforts are progressing near Browntown to the north, as crews work to connect lines with the east side. Progress on contingency hand lines to protect the Oregon Caves National Monument will continue as well.

Poison oak has been reported, and one firefighter has been treated. Safety is a top priority among crews, and firefighters will be monitored for any signs of fatigue.

Devil Fire: Firefighters are concentrating on the southwestern edge of the Devil fire. Mop-up, patrol, and work securing the fire’s edge will continue.

Weather: Very low relative humidity and above normal temperatures will continue through the week. Winds will remain light. Winds in high terrain could reach up to 20 mph later in the week, with the potential to increase fire activity.

Evacuations There have been some evacuation changes; please refer to your local county’s Sheriff’s Office for details. County Sheriffs continue to work with fire leadership to determine when to modify evacuation levels.

Closures: The USDA Forest Service-Pacific Southwest Region’s Order, that closed some national forests in California, has been lifted for the Six Rivers and Klamath national forests; however, new fire area closure orders have been issued by these forests for the Slater Fire in California. The region is under emergency fire restrictions, although the use of gas stoves is now allowed.

Portions of both the Rogue River-Siskiyou National Forest’s Wild Rivers Ranger District and Siskiyou Mountains Ranger District reopened for use. Some areas remain closed for emergency crews’ safety and to allow for fire suppression and burned area recovery.

The Bureau of Land Management Medford District has public lands closures in effect near the Slater Fire and the South Obenchain Fire. Closure area maps are available at: www.blm.gov/programs/public-safety-and-fire/fire-and-aviation/regional-info/oregon-washington/fire-restrictions