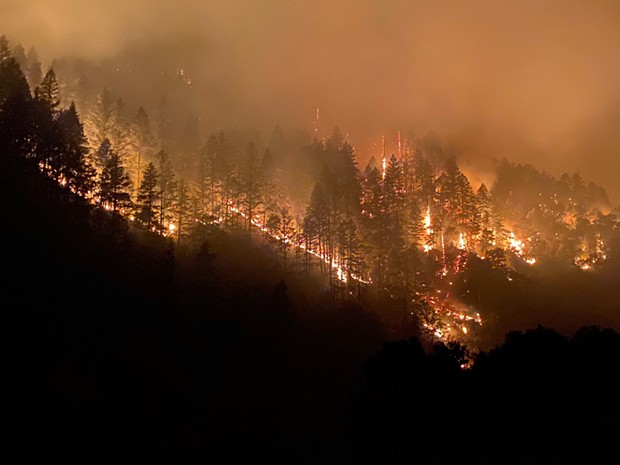 While an unhealthy air advisory remains in effect for eastern Humboldt County, including Willow Creek, Hoopa and Orleans, coastal areas caught some blue sky today with hopes that conditions will improve through the weekend.

“Westerly winds are expected to pick up this afternoon and push smoke to the east,” reads a press release from the North Coast Unified Air Quality Management District. “Tomorrow … looks to be when a combination of rain and increasing winds will result in significant clearing of smoke, especially along the coast, although all areas should see improvements.”

For the full update on air quality conditions throughout the county, click here.

Decreasing temperatures and increasing humidity — and maybe even some rain tomorrow — are expected to aid fire crews efforts to control the largest fire in California history.


The fire, which was sparked Aug. 17 by a series of lightning strikes, continues to threaten portions of southeastern Humboldt County and evacuation warnings remain in effect.

Crews continue to work on containment lines to protect structures in the Ruth Lake area, with helicopters assisting ground crews with bucket support and reconnaissance operations. A chance of rain the forecast tomorrow could aid efforts.

The complex of fires burning 14 miles north of Willow Creek and just east of the Hoopa Valley Reservation in Klamath, Six Rivers and Shasta-Trinity national forests is being slowed by increased humidity.

“Increasing moisture in the atmosphere is beginning to slow the fire, although wood fuels remain very dry so burning and smoldering is continuing,” an update states. “Firefighters are focusing most of their control work on the east and south east sides, although work continues all around the fire.”

Crews continue to focus efforts on strengthening fire protection lines around communities, including Godfrey, Blue Ridge and Black Bear. Evacuation warnings remain in effect for Forks of Salmon and Denny in Trinity County.

Fire crews continue to focus on reinforcing containment lines around both fires that have been burning along the California-Oregon border since Sept. 8 and have destroyed 440 structures while threatening another 150.

“The transition to cooler, moister air continues, accompanied by brisk winds from the southwest,” an update states. “Some rain showers may arrive later today and into Sautrday, with the greatest chance for rain expected Saturday afternoon. … Areas exposed to higher winds from the southwest may show increased burning ahead of the rain.”