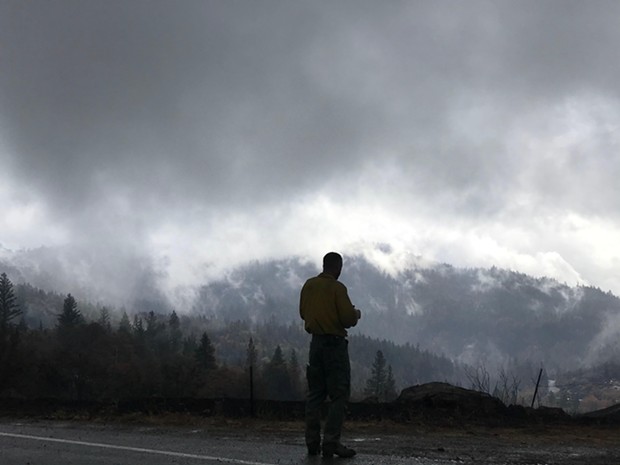 Rains fell across much of the fire area yesterday providing much-needed moisture, up to one-quarter of an inch, according to this morning's update.

"This was by no-means a season-ending event, and the fire is still active. Starting today and continuing for the next several days the chance of rain is 0%. This drying trend will combine with increased temperatures over the next couple days, which could increase fire behavior and intensity," the update reads.

Today, crews will continue to mop-up along containment lines across the Northwest Zone and patrol around nearby structures in the Ruth Lake Area and north on the Mad River Road. West of the Ruth Lake, crews continue line construction from the Lassic Fire burn scar near Coffee Pot eastward towards the lake.

In the Northeast Zone, fire activity was moderated yesterday by high humidity and precipitation that occurred across most areas of the fire. Where rain showers were heavier crews patrolled the fire from Hwy 36. The moisture allowed fire crews to make good progress and engage the fire directly in the afternoon.

Cooler temperatures are expected today with a warming trend as the week goes on. No more rain is forecast this week and the area will start to dry from yesterday's rain, which prevented firefighters from conducting defensive firing, but also helped moderate fire behavior for the next several days.

Today, firefighters will continue to mop-up and secure lines on all flanks. Thanks to clearer skies, air resources will be available to support ground crews for the first time in two weeks.

Welcomed rainfall deposited one-half of an inch around Happy Camp to just under one inch on the northwestern portion of the Slater fire, according to this morning's update.

"The conditions represent a season slowing event providing opportunities for crews to better establish lines directly along the fire’s edge," the update reads.

Along the northern perimeter of the fire, operations are shifting toward patrol, allowing additional crews and resources to join efforts on the fire’s edge along the Knopki and Chicago Creek drainages near Sanger Peak.

Along the southern flank of the fire, crews continue to patrol, monitor and strengthen containment lines near Happy Camp with a focus on increasing the depth of containment.

Hazard tree removal along the Grayback Road (also known as Happy Camp Highway) between Takilma and Happy Camp remains a high priority. This work will restore safe, reliable access for firefighters, residents, and those working to bring power back to Happy Camp.

Mop-up is complete on the northern perimeter of the fire along the Butte Fork of the Applegate River, 1040 Road and Pacific Crest Trail, placing it in a monitor and patrol status.

For more on the Slater-Devil Fire, read the update below:
See related PDF 2020.10.11_Slater_and_Devil_Fires_Update.pdf