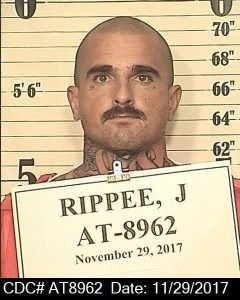 Pelican Bay State Prison authorities are investigating the death of Joshua E. Kirtley, who was in prison for the 1998 murder of Paul Sanders at a marijuana grow in the Southern Humboldt area, as a homicide.

Staff found 42-year-old Kirtley dead in his cell on Oct. 17.  Jesse A. Rippee, Kirtley’s cellmate, who was in the recreation yard when Kirtley was found, has been placed in segregation while the investigation is ongoing. Prison officials said Rippee had multiple injuries, "including facial swelling, scratches and bruises."

Kirtley was accused of beating and killing Sanders over a missing $5,000. Sanders’ girlfriend reported him missing a few days after he disappeared but his body wasn't recovered until June of 2003 after Kirtley was jailed on domestic violence charges and, Kirtley’s mother-in-law at the time told law enforcement about his involvement in Sanders' killing.

A man who was also charged in Sanders’ death led deputies to his remains. The first trial ended in a hung jury but Kirtley’s second trial resulted in a conviction and sentence of life in prison with the possibility of parole.

Below is a press release from the California Department of Corrections and Rehabilitation.

Officials at Pelican Bay State Prison (PBSP) are investigating the death of 42-year-old inmate Joshua E. Kirtley as a homicide.

On Oct. 17 at approximately 12:30 p.m., prison staff during a security check discovered Kirtley unresponsive in his cell. Staff immediately responded, called 911 and began life-saving measures. Kirtley was transported to PBSPs medical clinic and staff continued medical aid. Paramedics transported him to an outside hospital and he was pronounced dead at 1:05 p.m.

Jesse A Rippee, Kirtley’s cellmate, was on the recreation yard when Kirtley was found. Rippee had multiple injuries, including facial swelling, scratches and bruises. He was treated at the prison and then placed in segregated housing as PBSP’s Investigative Services Unit continues its investigation. The Office of the Inspector General was notified.

Kirtley was received on July 28, 2004 from Humboldt County. He was serving a life sentence with the possibility of parole for first-degree murder. Rippee was received on Sept. 24, 2015 from Los Angeles County, sentenced to 10 years for first-degree burglary, a second strike offense. While in prison, he was sentenced to an additional 15 years in 2017 for assault by a prisoner with a deadly weapon or force likely to cause great bodily injury.