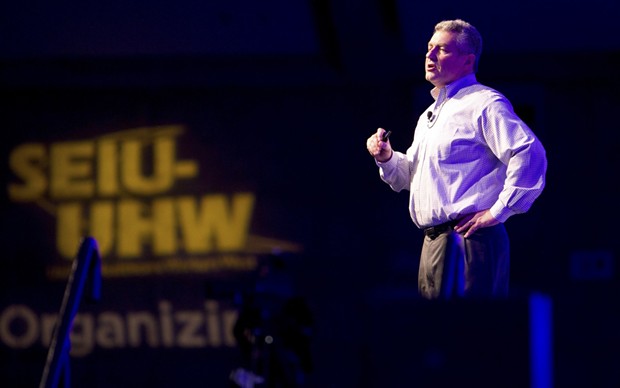 For the second time in as many elections, California voters are caught in the middle of a fight between private dialysis companies and a union with a history of taking its battles to the ballot.

The question: Is the union effectively using its power to boost health care and its membership, or is it resorting to electoral blackmail?

The Service Employees International Union-United Healthcare Workers West (SEIU-UHW) sponsored Proposition 23 on the November ballot, which would add new regulations for dialysis clinics. It put a similar measure before voters in 2018, which they rejected. In the last two elections, it’s also sponsored a measure to tax hospitals in the Los Angeles County city of Lynwood, and to cap prices at Stanford hospitals and clinics in several Bay Area cities.

And that doesn’t count the many initiatives it began working on by collecting signatures but withdrew before they reached the ballot — including a minimum wage initiative in 2016, a pair of measures to limit hospital fees and executive pay in 2014, and two other initiatives to curb hospital bills and expand charity care in 2012.

All told, these campaigns have cost the union at least $43 million, and resulted in no wins on the ballot in California — though union President Dave Regan says they’ve helped make progress in other ways. The practice has earned him a reputation as an aggressive labor leader who uses the initiative process to needle adversaries in the health care profession as he tries to expand membership in his union.

“Dave Regan has made this into a strategy,” said Ken Jacobs, chair of the UC Berkeley Labor Center, which researches unions.

He praised Regan for attempts to organize workers that also cast the public’s attention on problems in the health care system.

“He’s fond of ballot initiatives as a tool for both moving policy and gaining leverage in an industry.”

Direct democracy — which allows voters to make laws through initiatives and repeal them through referendums — has been part of California’s political system for more than a century. The original idea was that people should have a way to pass laws when the Legislature won’t act. Over time, initiatives — sometimes even just threats of initiatives — have become a way for interest groups to exert influence, essentially by putting voters in the middle of an industry fight.

“That’s unfortunate because it turns voters off when they find out what’s really going on.”

Proposition 23 would require dialysis centers to have a doctor on site during business hours, which the union argues will make treatment safer and compel the for-profit companies to prioritize patient care. Dialysis companies say the costly requirement would force them to close some clinics, and have so far poured $105 million into fighting the measure, arguing it amounts to a hardball move by the union to drain industry finances until clinics agree to allow their workers to unionize.

“They have been trying to unionize dialysis clinic employees in California for about five years and so far the employees have said they’re not interested,” Kathy Fairbanks, spokesperson for No on Prop. 23, said by email.

“UHW has chosen this destructive path where they place measures on the ballot in an attempt to try to get the industries to acquiesce to their demands.”


Proposition 23 is hardly the only industry fight on the California ballot this fall. Gig companies including Uber and Lyft have funneled nearly $190 million and counting into a measure that would exempt them from aspects of state labor law. Bail bonds companies have spent at least $10 million on an attempt to overturn a law banning the use of cash bail. Realtors plowed more than $40 million into a proposition that would change property tax law in a way they think will increase home sales.

What makes Regan unusual is how frequently he’s used initiatives since he became president of SEIU-UHW in 2011. Most of his union’s California initiatives have targeted health care companies where he’d like to gain more union members.

Nationwide, however, SEIU-UHW has pushed ballot measures with a broader lens. Regan helped launch a nonprofit called the Fairness Project, which has sponsored initiatives in more than a dozen states to raise the minimum wage or expand who qualifies for government-funded health care through the Affordable Care Act.

Regan is proud of his approach, arguing that using initiatives to put questions directly in front of voters helps workers and curbs economic inequality.

“It’s part of the democratic process,” he said. “All we’re doing is taking advantage of something that is available to people in California, and available in a lot of other places in the country.”

The Fairness Project reports winning 18 of the 19 initiatives it sponsored nationwide. The union’s win record in California is not as strong, though Regan contends they make tactical gains even when they lose or withdraw measures.

The union has withdrawn other initiatives amid negotiations with hospital companies or politicians.

It pulled back a pair of measures to cap hospital fees and executive salaries in 2014 after the hospital industry agreed to work with the union to lobby the government for more health care funding. Months earlier, hospital leaders had described the union’s initiatives as threats over stalled efforts to unionize more workers — a characterization Regan denied at the time. The episode marked the second time the union withdrew ballot measures after reaching an agreement with hospital leaders.

The union floated and then withdrew an initiative to raise California’s minimum wage in 2016 after then-Gov. Jerry Brown agreed to sign a similar increase into law. Regan said Brown’s staff first called the union’s signature-gathering contractor to see if the proposal had enough support to qualify for the ballot.

“We were prepared to file them,” Regan said. “And (Brown) just saw the writing on the wall and reversed his course. I don’t think there’s any question whatsoever that it was the concrete, direct result of what we did.”

The minimum wage deal is Regan’s biggest political success in California and an example of the potential for a pushy style to pay off.

But it’s also led to friction. Democratic Assemblymember Richard Bloom reported to the Legislature in 2018 that Regan shoved him during a reception at a Sacramento restaurant, the Sacramento Bee reported at the time. A process server accused Regan of assaulting him when he tried to serve legal papers at Regan’s home in 2016. And a sexual harassment lawsuit filed in 2018 by a former SEIU-UHW employee didn’t name Regan as a defendant but said he created a hostile work environment for women.

None of the allegations appear to have led to much. Assemblyman Bloom declined to comment, and a union spokesperson who said he witnessed the incident at the Sacramento restaurant said Regan never touched the legislator. Although police were called to the incident with the process server, the Contra Costa County District Attorney did not press charges. And the harassment case against the union was confidentially settled earlier this year.

What some characterize as Regan’s brusque personality and strongarm politics has caused him to lose potential allies in the labor movement.

“There’s great resentment toward him because of his ‘my way or the highway’ kind of way of dealing with other folks,” said Sal Rosselli, who worked with Regan as part of the larger SEIU umbrella union for many years, but now heads the rival National Union of Healthcare Workers.

Regan’s frequent use of ballot measures is “dishonest with voters,” Rosselli said. “He’s not doing it to improve the quality of health care… He’s doing it to gain leverage over the employers for top-down organizing rights.”

Michael Lighty, a health policy consultant who was a director of the California Nurses Association for many years, has a similar view.

“He pursues a pretty self-interested narrow organizational program that tends to be couched in an industry critique, but really is focused on immediate tactical objectives that may or may not be in the broader interest of health policy or health workers,” Lighty said.

“It’s not working and I’m not even sure it’s really serving themselves well. I don’t see the progress.”

But Jacobs, of the UC Berkeley Labor Center, said Regan is highlighting legitimate health care problems, including at the for-profit companies that control most of the marketplace for dialysis.

“There is no contradiction between doing something that could help create leverage around organizing and doing what is right and needed for patient care,” Jacobs said. “Both can play out at the same time.”

CalMatters is a nonprofit, nonpartisan newsroom committed to explaining California policy and politics.