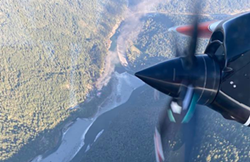 A vegetation fire is burning off the north end of Highway 169 and threatening multiple structures near the community of Johnson northwest of Pecwan, according to Cal Fire Battalion Chief Paul Savona. The call came in about 4:07 p.m., he said.

“Aircraft are currently at the scene of a 1/4 to 1/2 acre fire,” he said. “Air will work to slow the fire with retardant until ground resources which are on the way get there.”

Savona said that Salyer Fire, Hoopa Fire, Yurok Fire, and Willow Creek Fire have been dispatched to the scene of what is now called the Church Fire.