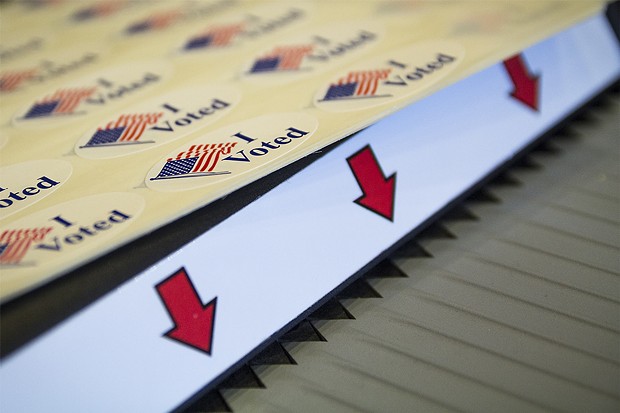 Less than a week before Election Day and anxiety over the postal service’s ability to ferry voters’ ballots to county election administrators on time has ratcheted up yet again.

Back in May, the United States Postal Service’s top lawyer advised voters across the country to put their ballots in the mail no later than 7 days before Election Day “to account for delivery standards and to allow for contingencies.”

On Monday, the U.S. Supreme Court issued a ruling effectively barring election administrators in Wisconsin from counting mail-in ballots that are postmarked before the polls close but which don’t arrive until after Election Day. Democrats and liberal court watchers were particularly alarmed by the opinion penned by Justice Brett Kavanaugh, which seemed to reflect the justice’s ambivalence about the practice of accepting ballots after the polls close. “States want to avoid the chaos and suspicions of impropriety that can ensue if thousands of absentee ballots flow in after election day and potentially flip the results of an election,” Kavanaugh wrote. It’s almost as if he were writing about California.

But election administrators and legal experts have a message for voters here:

First, about that warning from the postal service: California is different. tweet this

First, about that warning from the postal service: California is different.

This summer, state legislators passed a law giving any ballot postmarked before the polls close up to 17 days to wend its way from a voter’s mailbox to county administrators. The law was meant to ensure that even the most catastrophic of postal snafus wouldn’t disenfranchise mail-in voters.

The Postal Service’s warning is “what you get when other agencies try to do your job for you,” said Santa Cruz County Registrar Gail Pellerin. With California’s 17-day window for incoming ballots, voting by mail ought to be a safe option at least until the coming weekend, she said. If voters want to be extra cautious, they can take their ballot directly into a post office: “Walk it in and get it postmarked.” Or deposit it in a county-managed drop box or at a vote center.

(For more information on voting in Humboldt County, including where to find a drop box or vote center, click here. Want to check the status of your ballot? Click here. According to the state, 33,230 of Humboldt’s mail-in ballots have been accepted by the Elections Office as of Oct. 26. A total of 86,385 were sent out.)
Humboldt County Ballot Drop Box and Voter Center Locations

Second, about that Kavanaugh opinion: again, California is different.

As UC Irvine law professor Rick Hasen wrote in the Washington Post, the linchpin of Kavanaugh’s opinion wasn’t his antipathy to counting ballots after November 3. It was an argument about judicial overreach and which branch and level of government has the power to set election rules.

Here’s the chain of events that led up to this opinion: Wisconsin state law, passed by its legislature, requires all ballots to be in by the end of Election Day. In September, a federal judge ruled that, in light of the pandemic, counties should ease up those restrictions and allow otherwise valid ballots to be counted six days after the fact. The Supreme Court reversed that ruling.

“Assessing the complicated tradeoffs involved in changing or retaining election deadlines…is primarily the responsibility of state legislatures and falls outside the competence of federal courts.”

That reading of the constitution, Hasen writes, gives state legislatures “almost absolute power to set the manner for conducting presidential and congressional elections.”

Fortunately for fans of California’s 17-day election rule, it was penned by the Legislature. In an email, Hasen said that he does not “anticipate any issues along this line” in California.