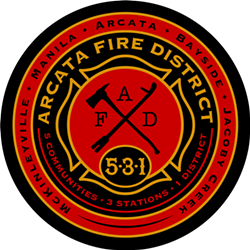 Firefighters responding to the report of a fire on the wall of a business at 105 Alder Grove Road in Arcata off Highway 299 at 10:26 a.m. found smoke coming from a commercial structure at a mill located there.

According to Arcata Fire Battalion Chief Sean Campbell, the fire had been extinguished by employees of the mill. “Their fire brigade did a great job,” he said. “Their employees were fantastic to work with.”

Campbell said that a piece of commercial equipment had overheated and caused a pipe to rupture, spewing oil under pressure. In turn, the oil ignited and consequently sprayed flames.

“When the employees saw black smoke, they deployed their fire team,” Campbell said. “They were able to extinguish the fire by the time we got here.”

Cal Fire and Arcata Fire assisted with the mopping up.