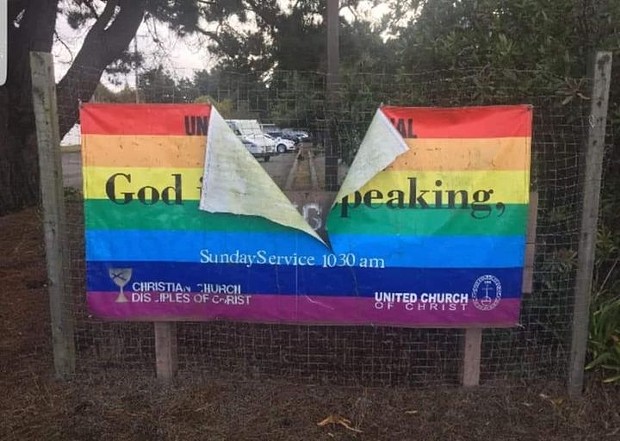 “It has been torn mostly down the middle and there was another attempted scoring several inches to the left of that,” explained Rev. Cindi Knox, the leader of the congregation. “It looks like someone attempted to rip it in half.”

Knox explained, “The Pride Flag was put up before I got here because our church is open and affirming of same-sex and transgender people. The congregation wanted to show they were affirming of their place in leadership in the Church.” This had a special meaning for Knox who is herself a transgender and lesbian woman.

She said the flag was used to welcome her to the church. “I was very glad to see that sign when I came; it spoke to me,” she explained. “We have carried it in a number of different pride parades. The first weekend I was here, we carried it.”

Raven Knickerbocker, a member of the congregation who helped create the flag that was destroyed and will help create the next one to replace it, was upset at the destruction of her work.

"I love our church and we do so much for so many people in the community without any expectation of getting anything back for it. Just because it’s the right thing to do and it feels like an attack on our church because something that represents us was destroyed," Knickerbocker said. "That flag is rainbow which of course represents our alliance with the lgbtq+ community, perhaps somebody saw that our pastor was offering to perform same-sex marriages and maybe that angered them, or maybe they were angered because we are a church or possibly because of our work with Centre el Pueblo. I don’t know I just think it was a cheap shot and it wasn’t fair."

She also said, “Our pastor was just in the local media offering to perform same sex marriages after the new [Supreme] court appointee was sworn in. [The Church is] very open and affirming and also immigrant welcoming. I know that there is a lot of tensions boiling over during the election and a lot of our [members] don’t think that the [timing of this] vandalism is coincidental.”

Knickerbocker explained that she will have difficulty creating her part of the new flag now. “I created the personalized portion of the banner over five years ago,” she told us. “I have since lost most of my vision due to a brain tumor, so it will not be as easy to do it again.”

While Knickerbocker feels attacked, the Reverend Knox is glad that no one was hurt and she is also concerned about the perpetrator.  “I’m…very grateful that it was an object not a person,” she said. “Our greater concern is for the person who feels angry enough to lash out like that. I’m hopeful that that anger gets addressed and they can turn back to love. Anger like that can eat someone up from within.”

In addition, she says that while she is sorry the flag is damaged, the church was already concerned about how worn it was. “The thing is we had already purchased a replacement for it,” she told us. “The new banner should be up pretty soon. I’m not that concerned about it getting torn. If it happens repeatedly we’ll find another more durable way to express our openness and affirmation because it is part of who we are.” Then she quoted the book of Isaiah saying, “My house shall be a house of prayer for all peoples.”