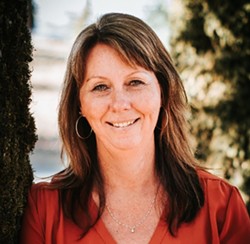 There are fewer than 3,000 ballots in Humboldt County remaining to be counted, according to Registrar of Voters Kelly Sanders, seemingly making it incredibly unlikely two-term incumbent Supervisor Estelle Fennell will be able to make up her deficit to challenger Michelle Bushnell.

With 11,742 ballots tallied in the Second District race thus far, Bushnell has taken 51.5 percent of the vote and holds a 356-vote lead.

In an email to the Journal, Sanders said her office still has approximately 2,950 ballots left to process countywide, though likely not all will prove valid. She said 2,500 provisional ballots were cast on Election Day that still need to be tabulated, as well as 100 vote-by-mail ballots the office still has to scan. Finally, she said, her office has about 350 ballots it received in which the voter's signature was missing or did not match the one the Elections Office had on file. Those voters, Sander said, were sent a letter and still have the opportunity to fill out a signature verification form and prove their ballots are valid.

But it appears unlikely to matter. Even if all the approximately 2,950 ballots remaining prove valid and fall within the Second District, Fennell would have to pull 56 percent of them to make up the deficit — a margin she has yet to meet in any batch of ballots thus far.

Sanders indicated she expects to have the last of the outstanding ballots tallied soon.

"We're a lot closer to finishing," she said.