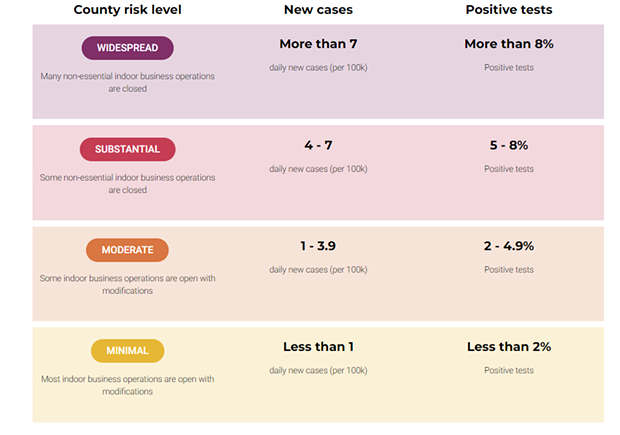 Just a short two weeks ago, Humboldt County was sitting in the coveted “minimal” COVID-19 risk ranking, one of just a handful in the state to do so. Today it joined most of California by being placed in the purple, or “widespread” category after a rapid rises in cases over the last few weeks.


No California counties remain in the "minimal" tier.

Under the purple tier, residents will be under a limited shelter-in-place curfew issued by Gov. Gavin Newsom that prohibits “non-essential work, movement and gatherings” between 10 p.m. and 5 a.m.

It will also mean increased restrictions for most businesses and other activities, including religious services, which will be limited to the outdoors. (Read more here.)


Local health officials had been warning residents of the possibility for weeks, urging caution to help stem the deluge of cases.


“This was, unfortunately, anticipated, as we’ve been seeing sharp increases in case counts throughout the community,” Health Officer Teresa Frankovich said in a news release on Monday. “Our goal is to stabilize and then decrease COVID-19 activity throughout Humboldt, in order to return to a less restrictive tier and protect our healthcare system.”

Yesterday alone, Public Health confirmed 56 COVID-19 cases since Friday, quickly setting the county on pace to surpass last week's record-breaking 71, which itself had obliterated a record for the most cases recorded in a single week since the pandemic began.

Humboldt saw a total of 59 cases the entire month of October. November, so far, has more than 200.


"We are truly in the midst of a surge here in California," the state's Health and Human Services Secretary Mark Ghaly said during a press conference today announcing the new tier levels and urging residents not to mix households during the Thanksgiving holiday.

"A no is a no and it is important," Ghaly said, noting he appreciates how hard these conversations can be with friends and relatives who still want to have a traditional celebration.

"These are the things we have to do to protect our friends and family because we love them," he added.


The state of California largely depends on two metrics to determine where a county falls in its tier system: the percentage of COVID-19 tests administered that come back positive over a seven-day period and the average number of new positive cases confirmed per 100,000 in population daily over the course of a week. Both have spiked locally over the course of the last month.

"Together we can stop the surge," Ghaly said. "We've done it before."