Back-to-Back Fires in Fields Landing and Eureka This Morning

by Iridian Casarez and Kym Kemp 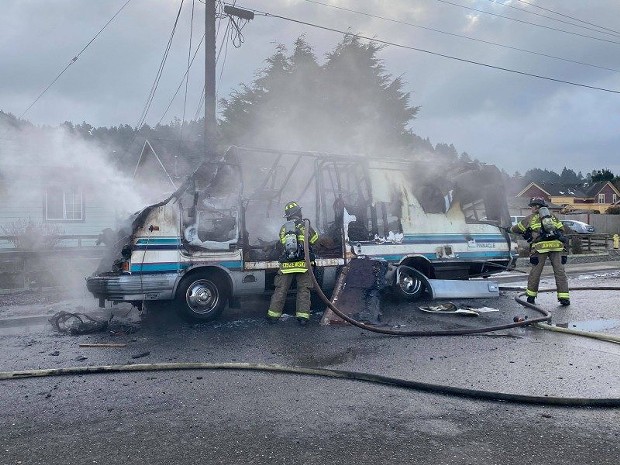 Humboldt County firefighters were busy this morning as they responded to two back-to-back structure fires, one in Fields Landing and another on Broadway.

The fire at Fields Landing was in a mobile home at Third and B streets. Firefighters quickly stopped the fire from spreading and destroying a nearby utility pole.

According to Humboldt Bay Fire Spokesperson Amy Conlin, Deputy Chief Bill Reynolds was the first command unit at the structure fire in Eureka, and he reported it as fully involved working fire.

None of the rooms were occupied when Humboldt Bay Fire arrived. The structure appears to have one shared attic. Firefighters had to vent the roof in multiple spots. One southbound lane of Broadway is closed in the area.

Read a Humboldt Bay Fire press release regarding both fires below.


On the morning of December 10, 2020 around 8:21 a.m., Humboldt Bay Fire responded to the first of what would become two structure fires within 20 minutes.

The first pulled crews to the 6600 block of Third Street in Fields Landing where a fully-engulfed R.V. posed a threat to a nearby utility pole and multiple residential homes. Bystanders watched as flames shot up from the vehicle and a large plume of grey smoke filled the air. Crews surrounded the vehicle and knocked down the fire, calling in aid from PG&E to assist with power lines down across the roadway. Deputies from the Humboldt County Sheriff’s Office and California Highway Patrol also responded to assist with crowd control and take witness reports.

While on scene at about 8:40 a.m., HBF was dispatched to a second structure fire devouring a room in an apartment complex on the 4200 block of Broadway. As resources split off from the first fire, a secondary command officer arrived to find a working fire bursting out of a room in an attached apartment complex. Crews quickly confirmed all persons were out of the building and initiated fire attack. As smoke and superheated gases filled the apartment, crews took to the roof to create venting holes allowing for heat, gas, and smoke to escape from the apartment. This improved visibility and working conditions for crews inside who were extinguishing the fire and preventing further spread to the attached units and a nearby shed belonging to a commercial business next-door.

Although no firefighters were harmed in either incident, we are aware that one resident and one cat suffered from moderate injuries associated with the fire on Broadway. The resident suffered from unspecified burns and was transported to the hospital by friends prior to the arrival of public safety personnel. Humboldt Bay Fire assisted with the injured cat and transferred care of the animal to Animal Control. HBF was assisted on scene by Fire Support, PG&E, Eureka Police Department, City Ambulance, City of Eureka Public Works, and Animal Control.

The cause and origin as well as initial damage assessment on both fires are still unknown at this time.

HBF would also like to thank Samoa Peninsula Fire District and Arcata Fire for providing call coverage while HBF resources were working on these incidents. Multiple multi-unit calls strains resources, making the need for mutual aid agreement with neighboring agencies ever more important. Thirty-five percent of the time HBF is dispatched to an emergency, a second unrelated emergency call is also dispatched. Our mutual aid agreements ensure sufficient resources can be provided to all emergency scenes.