A marathon special meeting of the Eureka City Council, stretching from 7 until 11:30 p.m., resulted in the council voting 3 to 2 in favor of a resolution temporarily prohibiting all syringe exchange services within city limits, with councilmembers Natalie Arroyo and Leslie Castellano dissenting. The wording of the resolution is tangled, stating that the city “supports” syringe exchange programs but nevertheless, “the City of Eureka needs to temporarily prohibit SEPs starting on December 16, 2020, until an ordinance is established, subject to review under the California Environmental Quality Act.”


Allison, a cardiac monitor technician who said he had seen the impact of opiate overdoses and injection-related illnesses in the course of his job, expressed deep conflict and regret over the decision, which will suspend the ability of the Humboldt Area Center for Harm Reduction to distribute clean needles to its clients from its brick-and-mortar location on Third Street. The nonprofit can continue its other services, which include distribution of naloxone (an overdose prevention drug), facilitation of and referrals to treatment programs, and food and clothing distribution. HACHR can also continue its mobile services to outlying areas, although, as Executive Director Lasara Allen pointed out, the nonprofit’s vehicle was recently vandalized on the night of an earlier, equally contentious city council meeting. 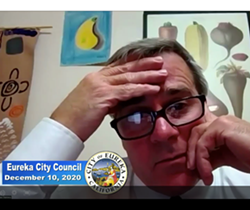 HACHR’s impact on the surrounding neighborhood — near the Humboldt County  Public Library — has been a topic of public debate for several years but matters reached a boiling point in August, when the city submitted a letter and memorandum to the California Department of Public Health in opposition to HACHR’s reauthorization as a syringe exchange. The letter cited a Eureka Police Department investigation during which an undercover officer bought narcotics from a HACHR client on the premises and a HACHR employee or volunteer allegedly facilitated narcotics sales. Allen stated that such behavior is not allowed on site, and that neither person’s behavior was condoned or encouraged by HACHR.

The investigation was launched after neighbors complained about an escalation in problematic behaviors near the needle exchange, including open drug use, noise complaints and needle litter. On Oct. 8 the CDPH reauthorized HACHR to conduct syringe exchange but excluded Eureka from its authorization, placing the nonprofit’s operations within city limits under local control. This led to several marathon council meetings and a mediation session between city staff and the nonprofit, resulting in a settlement agreement that would see HACHR erect a fence around its area of operation, hire a monitor to discourage onsite problem behavior and transition to mobile-only distribution of syringes as of June 1. But an entrenched majority of the council — Allison, Heidi Messner and Kim Bergel — expressed unwillingness to accept this settlement, with Bergel saying she was uneasy with HACHR conducting “business as usual,” until June 1. With the settlement dead, the council directed staff to prepare language repealing and replacing the existing ordinance so a new version could be drafted.

During public comment, which lasted two hours and saw 63 people speak (for two minutes each), many HACHR supporters questioned the timing of the decision. Winter is bearing down. COVID-19 cases are surging. The CDPH recently released a Vulnerability Assessment that put Humboldt County in its highest risk category for both fatal opioid overdose and HIV and HCV transmission. Also, notably, two of the councilmembers making the decision – Allison and Messner – are in their final days of city governance; new representatives are due to be sworn in on Tuesday, Dec. 15.

“I can guarantee that you will be on the wrong side of history if you choose to shutter harm reduction services in Eureka, especially during the pandemic,” said Holly Scaglione, a social worker and former co-director of the Humboldt Institute for Harm Reduction. Matt Curtis, a harm reduction specialist with CDPH, said the organization is recommending expansion, not restriction, of services at this time.

“I can guarantee that you will be on the wrong side of history if you choose to shutter harm reduction services in Eureka, especially during the pandemic,” — Holly Scaglione tweet this
Arroyo raised the issue of process, saying she didn’t feel like she could support the proposal.

“This doesn’t just feel like the 11th hour, it feels like 11:59 p.m.,” she said. “We’re literally getting a new council next Tuesday. It feels confusing to me and confusing to other members of the community that we’re talking about this change now. I want to note that while community members are maybe not thrilled with our current ordinance, HACHR is currently in compliance with that ordinance. It’s been a long and hard process, but we decided on something, and now we’re changing that. I feel like we wasted time and public money on a mediation process. That said, we’re here now.”

But Bergel stated she thought it would be better for the decision to be made by councilmembers who had the benefit of experience with the topic and added that neighbors who were exhausted by nuisance behavior and criminality couldn’t wait. She referenced one resident who had trash and needles dumped over her fence. (Several neighbors also joined public comment to express support of the decision.)

“It really is disappointing that we have to make this decision,” said Bergel.

Staff and councilmembers also commented on services offered by the city and county that could fill the gap until a new ordinance was in place, including expanded syringe exchange services by the Department of Health and Human Services and the city’s Uplift program, which could offer a “warm handshake” and transportation for clients seeking services from the county or from HACHR.

“You’re talking about putting people in a car. During a pandemic,” Allen interjected. Allen also disputed the efficacy of these solutions, saying not all clients were comfortable receiving services from the county and city.

“The reprehensible action of restricting access to sterile syringes and other safer use equipment will affect the whole community — in lives lost, in health lost, and in dollars and cents,” Allen said via a statement on the HACHR Facebook page after the meeting. “Taking this action during the COVID-19 epidemic adds a layer of cruelty. During winter months when life for our unhoused neighbors is already horrific, to say the least, is even more damnable.”

The statement also referenced a discussion with legal counsel questioning the whether or not the action was enforceable.

Arroyo’s quip about an “11th hour” decision was more than metaphorical; it was 11:30 p.m. when the deciding votes were cast. Castellano, who asked for a friendly amendment to the vote that would extend the grace period for HACHR’s syringe exchange services to the end of the year and was voted down, noted that Allison seemed to be struggling with the decision and asked him if he would be interested in changing his mind.

“I feel the gravity of this situation,” he said. “HACHR is not stopping its services except for syringe exchange, and the county can pick up the slack momentarily. I guess I’m ready to vote even though I hate it … I hate that it came to this. I’m really disappointed. I’ll probably have trouble sleeping tonight.”

Correction: The original version of this article stated that Allison is a registered nurse. The new version has his correct job description. The Journal regrets the error.