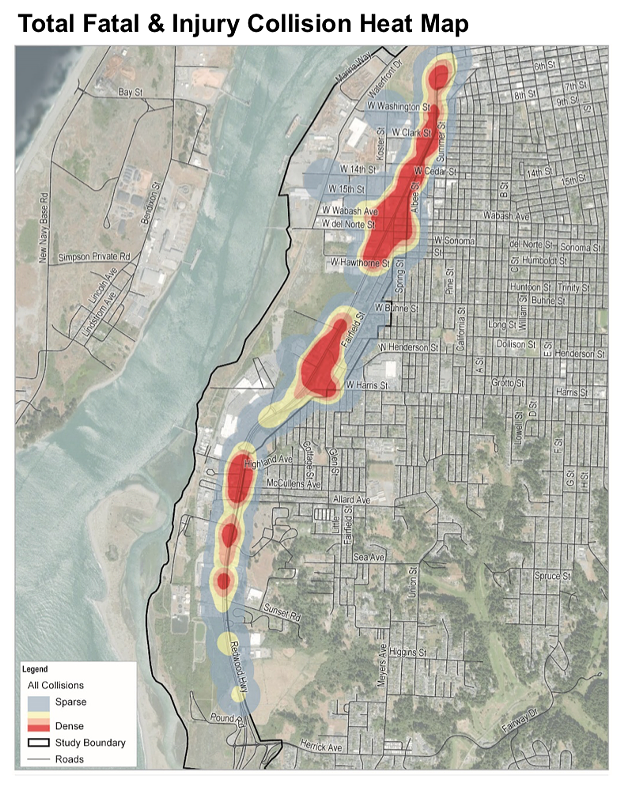 Broadway has long been an integral yet neglected part of Eureka. As a road that serves both as a state highway and as a city “Main Street,” it fills neither role satisfactorily. Half of all automobile accidents in Eureka happen on Broadway. This 3-mile stretch of road, which serves 35,000 vehicles daily, has been the site of regular fatal collisions, including three this year.

Local residents complain the road is ugly, difficult and dangerous to cross, and gives an unpleasant first impression to visitors coming into Eureka from the south. Motorists complain of long delays at traffic lights, left turns that are difficult and dangerous, and pedestrians dodging traffic as they jaywalk in the long long stretches that lack crosswalks or traffic lights.

Caltrans has been studying possible improvements to Broadway for decades, starting with a proposed bypass in the 1960s. That plan was abandoned, as were several others. The most recent attempt at solving this problem, called the Eureka Broadway Multimodal Corridor Plan, was begun in 2019, using funding allocated by the Humboldt County Association of Governments (HCAOG), in conjunction with Caltrans, and the city of Eureka. The plan was discussed in depth at the Dec. 17 board meeting of HCAOG. The final cost of the project is estimated to be $155 million, although proponents claim social benefits resulting from the project will eventually bring in three times that amount.

But some complain this project is too ambitious, among other things, and may take too long to address the very immediate safety issues. Colin Fiske, director of the Coalition for Responsible Transportation Priorities said the focus should be on safety.


“The issue is that people are dying on Broadway with disturbing regularity, and I don't want to talk about any project that's going to take 20 years — or maybe never get built — until after we've exhausted all the options for improving safety now,” Fiske said. 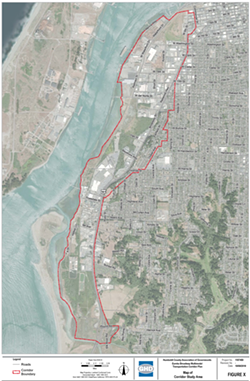 The underlying problem, according to Caltrans, is that the roadway simply is not wide enough to handle all its demands. Modern transportation planning requires that roadways encourage “multi-modal” use, which means bicycles, buses and sidewalks. Encouraging people to leave their cars at home means less air pollution and greenhouse gas. But to achieve this, people have to feel secure outside of their cars. They need sidewalks to walk on, bicycle lanes that are separated from the flow of traffic, sheltered places to wait for a bus and well-marked, frequent locations to safely cross the street.

Ideally, Broadway would have two traffic lanes in each direction and a center turn lane, as well as separate bus lanes, bike lanes and sidewalks on each side of the road. But large stretches of the existing road are too narrow to accommodate all these needs. Short of seizing the property of businesses that line the roadway — a move that would probably be political suicide for public officials and add dramatically to the cost of the project — project planners had to think quite literally outside of the box and divert some of the traffic to new roadways.

After considering (and dropping) a number of alternatives, the plan is to make sections of Broadway one-way. Northbound traffic would continue on the existing route: southbound traffic would be diverted off the road in two distinct locations onto what are called “one-way couplets.” Instead of turning directly onto Broadway from Fourth St., motorists would be diverted onto a future roadway that would cross the Balloon Tract and connect with Koster Street. Koster Street, which runs behind the general area of Costco and Eureka Natural Foods, would become one-way and rejoin Broadway at Del Norte Street, for another two-way stretch.

Broadway would split again near the Bayshore Mall, diverting southbound traffic to an as-yet undetermined location that would possibly cross coastal wetlands. This second “Southern Couplet” would rejoin Broadway at Truesdale Street. Broadway would continue as a two-way road the rest of the way to Herrick Avenue and the freeway.

In addition to these changes, public safety would be enhanced with the addition of numerous pedestrian crosswalks marked by flashing beacons, continuous sidewalks and bicycle lanes separated from traffic by planters or landscaping.

Besides improving public safety, the plan is projected to increase Broadway’s capacity for vehicles, making it behave more like a freeway. The plan would eliminate most left turns onto Broadway by installing a raised meridian in the middle of the road, which could only be crossed at specific signalized intersections.

If you’re a trucking company, time equals money. Since U.S. Highway 101 is the only north-south route in this part of the state, saving 15 minutes of delay while driving through Eureka equates to financial savings. One of Caltrans’ missions is to enhance the movement of goods through the state, which includes U.S. Highway 101 north of San Francisco. This long-term improvement plan began decades ago with the construction of a bypass around the town of Novato in Marin County. Next came a bypass around Cloverdale, followed by the controversial Willits bypass. Caltrans is still wrestling with issues around widening Richardson Grove, and also plans to re-build Last Chance Grade in Del Norte County. Fixing up Broadway seems to fit nicely into this list but some fear that the end result of all these highway improvements will open up the North Coast to unwanted development, while others might welcome it.

The public, as judged by the comments collected by Caltrans during surveys and focus groups, has mixed feelings about all this. Many people fear that the new roadways would interfere with the hiking trails along the coast. Some wonder about the wisdom of building new roadways in an area that is slated to be under water, as sea levels rise. The contamination in the Balloon Tract is a source of worry to others. And of course, any new construction west of Broadway would have to be approved by the California Coastal Commission, which could be a formidable barrier, especially if portions of the road would traverse wetlands.

Humboldt Baykeeper Director Jennifer Kalt said the scope of the project simply seems out of reach.

“The city of Eureka has already wasted over a million dollars on a road proposal with the same environmental constraints,” she said. “We need to fix safety problems on Broadway as soon as possible instead of pursuing this fantasy solution.”


Others welcome the improvements, especially the safety features that the new plan would bring. Many people have asked Caltrans to focus on the near-term safety improvements and get those done first. The full-term project will take years to plan, build and fund, with each step bringing potential pitfalls and challenges.

"The Broadway corridor is always high on the list of priorities for both beautification and safety,” Wright said. “We have been engaging in stakeholder meetings and city council discussions and would support moves forward to this end involving both the public and city of Eureka"

“We need to focus on the most critical areas,” she told the North Coast Journal. “Broadway between Vigo and Hawthorne, near the pawn shop, is very dark, and we need to start this project right there. Too many people have died in this area.”

Detailed graphics of all this can be viewed at www.eurekabroadwaycorridorplan.com/document-library.html.

Editor's note: This story has been updated from a previous version to remove a cliche that some readers found offensive. The Journal deeply regrets any pain caused.