UPDATE: One Dead, One Wounded and One Motel Damaged in Early Morning Incident in Arcata

Arcata Police Sgt. Chris Ortega confirmed today that a shooting at an Arcata motel in the 4800 block of Valley West Blvd. about 3 a.m. led to a fire and a man’s death.

According to Ortega, officers were dispatched to the motel “for the report of a man discharging a handgun in the parking lot.” When officers arrived at the scene, they contacted “a 30-year-old male who was brandishing a handgun from a room which he had set on fire.”

During the course of the incident, the suspect fired “up to 10 rounds” and shot an employee in the foot before officers arrived on scene, Ortega said.

At approximately the same time, according to scanner traffic, some officers heard what appeared to be more shots coming from the suspect's room, which was on fire. These, Ortega said, were “bullets discharging from the heat of the fire.”

“During the brief interaction with officers, the male shot himself,” the sergeant said.

The suspect was eventually pronounced dead at the scene. Ortega said there was extensive damage in at least two rooms at the motel.

The incident is still under investigation, Ortega said, and the name of the deceased suspect is being withheld pending notification of next of kin.

Arcata Police Chief Brian Ahearn attributed the “team effort” between firefighters and police for keeping the situation from getting worse. He credited “heroic actions by APD, HCSO, HSUPD, AFD and Humboldt Bay FD” and other fire departments, including Westhaven Volunteer Fire Department and Blue Lake Fire Department, with keeping the fire from spreading and protecting the civilians on scene.

UPDATE 11:30 a.m.: Our photographer, Kris Nagel took photos from the scene of the fire. 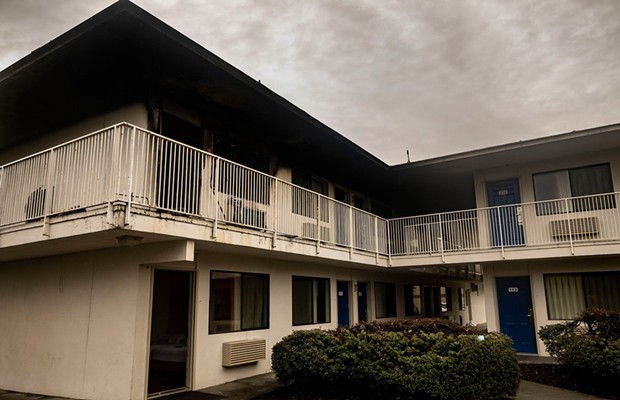 Editor's note: Earlier photos of the scene posted with this story were not of this fire. We’ve taken them down and apologize for any confusion they may have caused.