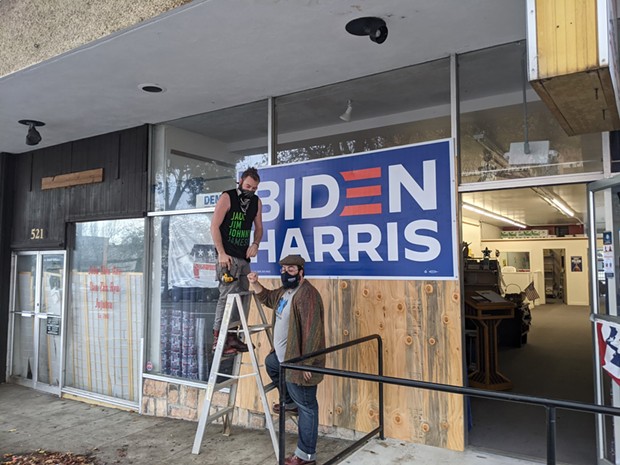 As a violent mob stormed the U.S. Capitol yesterday in an unsuccessful attempt to upend the certification of Joe Biden and Kamala Harris’ election, the Humboldt County Democratic Central Committee’s headquarters was broken into and vandalized.

( North Coast Rep. Jared Huffman was forced to lockdown in his office during the siege and tweeted as events unfolded before talking with the Journal by phone to discuss the harrowing experience. Read our first report about the storming of the Capitol here, and find our interview with Huffman here.)

According to Eureka Police Department spokesperson Brittany Powell, a passerby reported the large front window of the Fourth Street office had been broken around 12:20 p.m.

Among the damage officers found inside, she said, was “the head of a Hillary Clinton cardboard cutout was ripped off.” Powell said it was unclear what was used to break the window.

The HCDCC posted a message to the person or persons responsible on Facebook, saying, among other things, that “there are already too many problems in the world without destroying the property of your Humboldt County neighbors.”

“We have a long road ahead of us. Let's work together instead of pushing so much anger, hatred, and violence. Hell, you might even think about something nice you can do for the ‘bad guys' next time. Be better,” the post states.


The Humboldt County Democratic Central Committee would like to thank the person or persons who helped us improve our 4th...


It also notes that there are many “men and women of color who have felt like they have been robbed of justice and have had to defend the rights they have struggled for decades to enjoy despite having actual constitutional amendments in their favor.”

“It is hard to be kind and lawful when you feel so frustrated and angry isn't it?” the post continues. “However, in the future, we would appreciate it if you would take your stress to the ballot box instead.”