Huffman on Impeachment: 'History is Watching and Saving the Receipts' 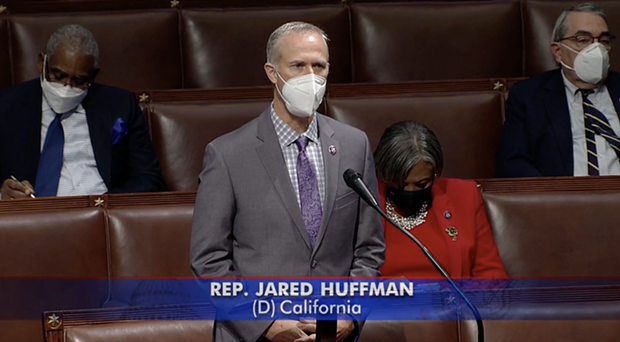 North Coast Rep. Jared Huffman took to the House Floor earlier this morning to support the impeachment of Donald Trump and his removal from the office of president in the wake of last week's deadly siege at the U.S. Capitol.


"Madam Speaker, history is watching and saving the receipts. Today, my colleagues across the aisle must choose which side of a very bright line they want to be recorded on, for all time. On one side: lies, sedition, inciting and supporting insurrection and domestic terrorism. The other side: your oath of office, the constitution, democracy, and decency. There’s no middle ground. Today we make history forever. So choose well. A vote to impeach Donald Trump means years from now, you can look your grandchildren in the eye and say, in that historic moment, I did the right thing."

It's a bright line. On one side: lies sedition, inciting & supporting insurrection & domestic terrorism. The other: our oath of office, the constitution, democracy, decency.

Today I will do the right thing. I will vote to impeach Donald Trump. pic.twitter.com/2DietMstlZ


Yesterday, Huffman held a town hall on the riots, during which he and his colleagues sheltered in place, as well as Trump's impeachment and the transition to a new administration. (Watch it here.)

And this week's Journal, going on newsstands today, features a story on Huffman's experience during the siege, his views on the 14th and 25th amendments, impeachment, Capitol security and where the nation goes from here.