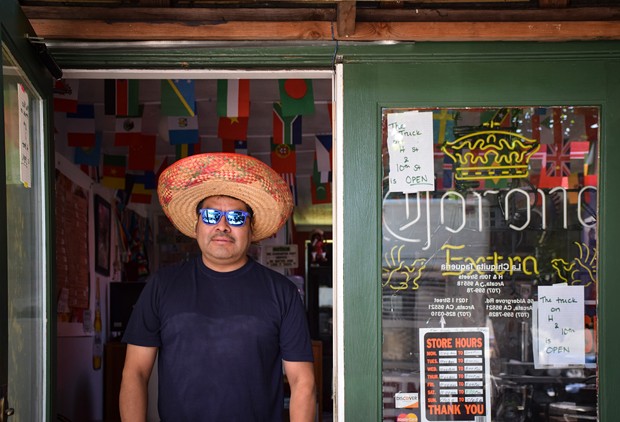 Esteban Gonzalez, an Arcata restaurant owner beloved by many, known in equal parts for his tireless work ethic, his good food and willingness to offer a hand up to anyone who needed it, died Jan. 12 of pneumonia. He was 55.

Amid an outpouring of support in the wake of his death, Gonzalez is being hailed in social media posts as a “local legend” and a “pillar” of the Arcata community, remembered as a ray of positivity who smiled easily and was quick to share what he had, whether it be a piece of wisdom or a burrito. Arcata Main Street set up a GoFundMe page Jan. 17 with the goal of raising $1,000 to benefit Gonzalez’s family. When this edition of the Journal went to press two days later, the page had collected more than $24,000, with donations continuing to pour in.

The Mad River Union reported Gonzalez’s death stemmed from complications related to COVID-19, though the Journal was unable to independently confirm that reporting.

That Gonzalez’s life saw him become a community fixture in Arcata is a testament to the power of a dream, having the courage to chase it relentlessly and what can be accomplished when hard work becomes a daily ritual.

Born one of five siblings in Mexico City, Gonzlez’s father died when he was 7 years old and he and his family grew up in poverty. He never attended school, “not even kindergarten,” he told the Journal in 2016, but his mom used to make him help cook beans and rice for the family, telling him that if he couldn’t work or go to school, he needed to contribute somehow. At 11, he said he started walking his neighborhood, knocking on doors and offering to take people’s garbage to the dump for a tip.

Newly married with a child at 18, Gonzalez told the Journal he realized that if he wanted to help lift his family out of poverty, he’d have to move north. He soon left his family, his mom, grandmother and siblings, and traveled to Tijuana, where he was homeless and worked odd jobs until he saved the $500 needed to pay a coyote to sneak across the border so he could get to Fortuna, where his uncle lived. Once Gonzalez saved enough to buy a car — a ratty old Volkswagen — he moved out in the mid-1980s and spent four months living out of his car on the Eel River Bar and bathing in the river while working three jobs. He’d get up in time to milk dairy cows at 3 a.m. before reporting to a local saw mill by 8 a.m. to work a full day, after which he’d wash dishes at a local restaurant until 10 p.m. or later.

Eventually, he saved up enough money to buy a home and, after becoming a U.S. citizen in 1993, he sent for his family, moving his daughter, wife and each of his siblings to the United States.

It was a debilitating back injury that led Gonzalez to change careers, putting $1,500 down for a $50,000 taco truck. He spent weeks calling his mom back in Mexico to learn her recipes handed down through generations of his family. He listened as she walked him through how to make pastor, mole and chile rellenos. After about six months of barely breaking even, his business clicked. Over time it expanded to two trucks and, in 2013, a small restaurant on Arcata’s I Street that went by La Chiquita for awhile before changing its name to Esteban’s, which is how most knew it anyway, as he was always there, darting between the kitchen and the register, seemingly always with a smile on his face.

In 2016, he told the Journal he arrived daily by 6 a.m. to start cooking and often didn’t leave until 10 p.m., after the kitchen had been cleaned and the next day’s food prepped.

Over the years, Esteban’s developed a fiercely loyal following, devoted as much to Gonzalez’s friendly face and positive attitude as to his mammoth burritos, which came stuffed with a unique blend of whole and refried beans wrapped in a spongy, homemade flour tortilla. Esteban’s — as well as Gonzalez’s trucks — became a favorite of college and high school students, who were looking to fill their stomachs on a budget and found themselves drawn to Gonzalez’s adoration of kids and young people.

William Brooke says he met Gonzalez 16 years ago when he was a 14 year old with an unstable home life drawn to taco trucks for a cheap meal.

“Things went downhill and I was homeless for a while,” Brooke recalls in a phone interview with the Journal. “He would feed me when I couldn’t afford anything. Every time he saw me panhandling, he’d give me some money or give me some food.”

Sometimes, Brooke says he’d show up drunk at Gonzalez’s truck and Gonzalez would give him a burrito, a cup of coffee and sometimes a place to sleep it off. Then, Brooke says Gonzalez would admonish him to “stop fucking up” with a smile before sending him on his way. After Brooke called Gonzalez’s truck once to see if it was open, he says Gonzalez took down his number and would use it to call from time to time to check in.

“He was a voice of reason in my life,” Brooke says. “He was super friendly and always wanted better for me, which was awesome because I didn’t have much of a father figure growing up.”

When Brooke told Gonzalez he’d gotten into college in Sacramento, he says Gonzalez was “hyped” and would continue to call him from time to time to check in while he was there.

When Brooke, who now runs an aerial mechanic shop, moved back to town, settled down and had kids, he said he’d bring them by Esteban’s to see Gonzalez, who adored them.

On social media, the stories of Gonzalez’s impact keep mounting. There’s the woman who recalled the time he chased her down the street to return a forgotten purse, the man who talked about how Gonzalez sat him down to share what he’d learned running the restaurant after the man mentioned he was thinking of starting his own small business and the many, many stories of Gonzalez never forgetting a customer’s order or always offering free tacos or burritos to celebrate a birthday. Many shared stories about how Gonzalez treated their children, noting the genuine joy he seemed to take in talking to them or helping them practice their Spanish.

Scott Greacen, who says he became a regular customer of Gonzalez’s while working at the old Environmental Protection Information Center office in downtown Arcata, recalls going to Esteban’s one evening with his son, Owen, while he was still trying to get his feet underneath him as a single dad. Gonzalez, who Greacen said always called him “Señor Scott,” seemed to understand the moment and radiated kindness and affection.

“It really pisses me off that he’s dead. It’s so wrong. It’s such a loss to our community and our country to lose someone like him, and to think we have 400,000 stories like that. He was in so many ways the best of us.” tweet this
About six months later, Owen was killed in an accident in New Mexico, leaving Greacen shaken to the core, “just stumbling around” in darkness. When Gonzalez saw him, Greacen says he recognized immediately that something was terribly wrong and stopped to talk to him. After hearing of 10-year-old Owen’s death, Greacen says Gonzalez told him the story of how one of his brothers had died in his arms after being fatally stabbed. It was a moment of shared grief and understanding, Greacen says, that somehow left him feeling better.

“There’s something about sharing that kind of experience that those of us who have been through can do,” he says. “It’s truly horrific but as someone who’s now on the other side of it to some extent, it’s this little gift you can give people to help them understand.”

“He didn’t have to do any of that,” Greacen continues after a pause. “He didn’t owe me anything. He was for real.”

To many, the linking of Gonzalez’s death to COVID-19 is at once tragic and enraging, a reminder of the virus’ disproportionate toll on both Latinx people and frontline workers. In Humboldt County, the Latinx community makes up just 12.2 percent of the local population but has accounted for 28 percent of its COVID-19 cases.

“Policy fucking matters because it comes down to what happens to people,” Greacen says. “It really pisses me off that he’s dead. It’s so wrong. It’s such a loss to our community and our country to lose someone like him, and to think we have 400,000 stories like that. He was in so many ways the best of us.”

While many will remember Gonzalez for the good meals he prepared them, or maybe the time he made headlines for chasing a gun-toting robber out of his store with a kitchen knife (Brooke says Gonzalez had done the same years earlier with a broken Jarritos bottle but to much less fanfare), but Gonzalez’s death leaves a huge void for those who held him closest.

“There’s so much to say but there are so little words to say it with,” Brooke says. “He was just a selfless human being. That’s what he was. It’s honestly just heartbreaking.”

Thadeus Greenson (he/him) is the Journal’s news editor. Reach him at 442-1400, extension 321, or thad@northcoastjournal.com. Follow him on Twitter @thadeusgreenson.