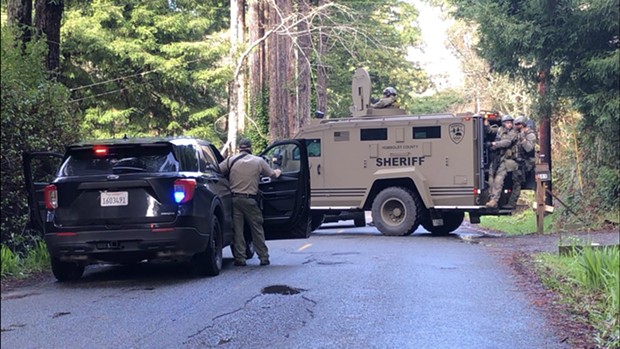 Find the full HCSO release at the end of the story.

The Humboldt County Sheriff's Office states a call came in at 10 a.m. reporting a domestic disturbance at the residence on the 800 block of Westhaven Drive with shots fired.

"According to one victim, a 35-year-old male suspect reportedly fired multiple shots outside the residence," the HCSO Facebook post states. "A male victim arrived on scene during the disturbance, at which time, the suspect reportedly threatened the victim with a firearm and shot at the victim’s vehicle. The victim was not injured. "

HCSO states the possibly armed suspect is described as a white male adult, 5 feet 11 inches tall, approximately 125 pounds, with brown hair and brown eyes and may have left on a mountain bike wearing a yellow and green jacket.


The SWAT team has arrived at the scene in Westhaven, where the Humboldt County Sheriff's Office reports occupants of a home where a possible shooting may have occurred "remain uncooperative to deputy requests to exit."

According to a HCSO tweet, three individuals are believed to be in the residence, including a child.

Westhaven Drive is blocked off by law enforcement responding to reports of shots fired at a residence and all those on the road from the 800 block to Eighth Avenue are advised to stay inside at this time.

According to the Humboldt County Sheriff’s Office, a male suspect, possibly armed, may have fled area on a large mountain bike wearing a yellow and green windbreaker.

People are being asked to avoid the area. It is unknown if there are any injuries, according to HCSO tweets on the incident, which also state that “involved parties are refusing to comply with deputies’ requests to exit the residence.”

On Feb. 2, 2021, at about 10 a.m., Humboldt County Sheriff’s deputies were dispatched to the 800 block of S. Westhaven Drive in Westhaven for the report of a domestic disturbance with shots fired. After arriving in the area, deputies made contact with one male victim. The victim told deputies that he had arrived at the residence while a disturbance was occurring and was confronted outside by the suspect, 35-year-old Walter Wayne Wright. According to the victim, Wright reportedly pointed a firearm at him and threatened to kill him. The victim was able to flee the scene in his vehicle, however, as the victim was leaving the property, Wright reportedly fired his weapon, striking the victim’s vehicle. The victim was not injured during this incident.

Deputies attempted to contact the individuals inside of the residence, however, the persons inside refused to comply with deputies’ requests to exit.

Due to the unknown status of additional victims and location of Wright, the Humboldt County Sheriff’s SWAT Team and Crisis Negotiation Team were requested to assist. Teams negotiated with the individuals inside of the residence for approximately three hours. During this time, deputies learned that Wright had possibly fled the residence prior to deputy arrival. At approximately 12:51 p.m., a community member contacted the HCSO Emergency Communications Center with information regarding Wright’s whereabouts.

Following up on this information, deputies responded to the 5200 block of Dows Prairie Road where they located Wright and took him into custody without incident. Following Wright’s arrest and negotiations with the Crisis Negotiation Team, the individuals inside the residence agreed to exit and speak with deputies. Deputies confirmed that all involved parties were accounted for and that there were no injured persons on scene.

This case is still under investigation. Anyone with information about this case or related criminal activity is encouraged to call the Humboldt County Sheriff’s Office at (707) 445-7251 or the Sheriff’s Office Crime Tip line at (707) 268-2539.