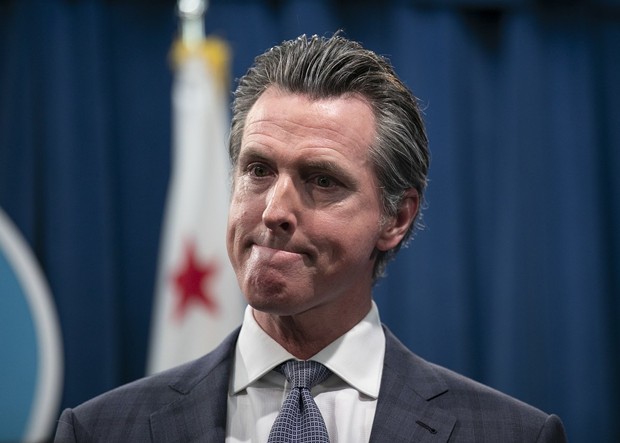 Two fresh polls indicate that California voters may be falling out of love with a governor who just three years ago was elected by a record-breaking margin, and who early in the pandemic ranked as one of the country’s most popular state leaders. How worrisome is this for the governor facing a burgeoning recall effort? It depends on which pollster you ask.

According to the survey from the Public Policy Institute of California, the era of bipartisan good feelings now appears to be over for the governor. That’s the bad news. About 52% of likely voters gave Newsom high marks, compared to 43% who disapproved of his performance.

That still puts Newsom above water with the public, but it marks a significant and consistent decline in popular support from past polls. In October, Newsom’s approval came in at 57%; in May, it was an even higher 63%. Institute president Mark Baldassare said the governor’s stratospheric approval during the summer — in which Democrats, independents and even some Republicans applauded the governor for his handling of the pandemic — was the aberration. In this new poll, “now we’re kind of back to the reality of hyper-partisanship” in which Democrats largely approve of Newsom, Republicans disapprove and independents are split.

But a poll from the UC Berkeley Institute of Governmental Studies tells a darker story for the governor. Only 46% of registered voters surveyed approved of
Newsom’s performance, compared to 48% who did not.

In the Berkeley survey, 36% of the respondents said they would vote to recall the governor if given the chance. Newsom campaign spokesperson Dan Newman issued a statement contending that voters “recognize that this is an incredibly challenging, intensely complicated, and critically important moment for public officials worldwide. That’s why the Governor remains laser focused on vaccinations, reopening, relief, and recovery.”

The campaign also pointed out that support for his recall in the Berkeley poll was comparable to the 38% of the vote that Republican candidate John Cox received in 2018 when he lost to Newsom by the largest margin in a California governor’s race since the 1950s.

As for why polling results might differ between the two polls, there is no single explanation. The pollsters use different methodologies: PPIC gathers its responses by phone, the Berkeley poll fields them online. And there is natural variability in any poll, which tries to make an inference about overall public opinion based on the responses of a small sample.


In both surveys, large swaths of the respondents said Newsom has not done a good job handling COVID vaccine distribution. To the contrary, in the Berkeley poll, 40% of respondents said the governor has done a “poor” or “very poor” job getting Californians inoculated. In the PPIC poll, 26% of adults surveyed said the governor had done a “poor” job, with another 31% deeming his performance “fair.”

It’s common for voters to sour on an incumbent governor a couple of years into his term as the “honeymoon period” ends and “over time, they become less shiny and more disappointing,” said Kimberly Nalder, political science professor at Sacramento State University.

But given Newsom’s consistent decline in two polls, coupled with months of bad news on the pandemic-front, public opinion is almost surely being driven by the governor’s COVID-response, she said. The governor’s infamous, unmasked dinner with lobbyists at the French Laundry, in which he was photographed dining maskless with lobbyists at one of the state’s toniest restaurants, may have been an inflection point. “All of his regular press conferences, talking about ‘meeting the moment” sort of ring false after people were able to see that he wasn’t following the restrictions.”

A coda: Perhaps the most troubling news in either survey has nothing to do with the governor’s electoral fortunes. PPIC’s survey asked Californians how likely they would be to get a vaccine when offered. Of all the adults asked, 24% said they either “probably” or “definitely” would not. Among Black Californians surveyed, the figure was 55%.