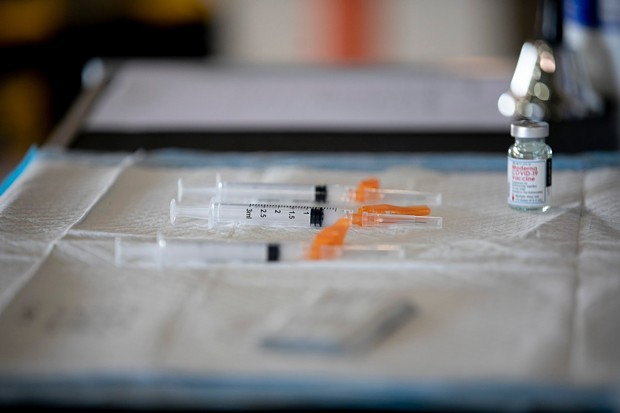 An influential group of California health experts is holding fast for now to Gov. Gavin Newsom’s decision to make age the primary criteria for getting the COVID-19 vaccine.

The decision announced Wednesday dismayed advocates who hoped the group would recommend moving disabled people and those with chronic medical conditions to the front of the line alongside those age 65 and older.

“My disability makes my immune system very weak. When I get a simple cold it goes to my lungs and I have a hard time breathing,” Dina Garcia of Chatsworth wrote in advance of Wednesday’s meeting of the state’s vaccine community advisory committee, where the decision was announced. “My doctor told me that if I get COVID, I may not survive. My worker (personal attendant) has already told me they would not take the vaccine. I am extremely worried that I will not survive this pandemic.”

The outside panel of experts convened by state officials to set California’s vaccine priorities made its decision after reviewing research showing that older people are far more likely to be hospitalized or die of COVID-19 than even people with significant disabilities or medical conditions, said Dr. Oliver Brooks, the group’s leader.

Disabled people and those with chronic conditions would be vaccinated after people 65-plus and a few groups of essential workers such as teachers and farmworkers — but still before the general public — if state officials adopt the panel’s recommendations. Disability advocates are fiercely lobbying Newsom to move in the vaccine order, and he could override the group’s proposal.

Erica Pan, the state's epidemiologist, said the group also recognized that while 8.5 million people are currently eligible for the vaccine, California has only received about 6.7 million doses.

“These are extremely challenging decisions we are making,” Pan said.

In mid-January, California abruptly pivoted to age as the primary eligibility criteria to simplify and speed up a widely criticized and chaotic vaccine rollout.

The decision alarmed disability advocates, said Christina Mills, executive director of the California Foundation for Independent Living Centers. They hoped state officials would this week announce a plan to move disabled people up the priority list, but that declaration never came.

Instead, Mark Ghaly, the state’s top health official, said Tuesday that he was aware of the community’s concerns and spoke about “beginning to galvanize around an opportunity that we will announce later.”

The comment didn’t sit well with Mills, who lives with a genetic bone disorder known as osteogenesis imperfecta and uses a wheelchair and help from personal assistants to live on her own.

“Honestly it just pisses me off even more,” Mills told CalMatters. “It’s like, what are we waiting for? The state has not figured out how to operationalize the vaccine for people like us.”

The federal Centers for Disease Control recommended that people with underlying medical conditions such as diabetes, cancer, cystic fibrosis and obesity receive the vaccine alongside those aged 65-74, after people 75 and up and frontline workers. But states are allowed to tweak those priorities.

For instance, Colorado will vaccinate people with two or more high-risk medical conditions alongside people 65-plus. Florida is currently vaccinating people considered by hospital providers to be “extremely vulnerable” to COVID-19 along with people 65 and older. In contrast, Kansas has placed people under 65 with high-risk conditions behind people 65 and older, prisoners and those living in other “congregate settings” that aren’t nursing homes.


But California changed its priority to 65+ based on studies that show age is a bigger predictor of death than disabilities. (Some research suggests that certain conditions, such as Down Syndrome, contribute to a higher risk of dying from COVID-19 than the average person, but the research is mixed.)

Even when vaccines become more widely available, Mills and other advocates say immunizing people with disabilities and chronic medical conditions will prove challenging. Paratransit services available to disabled people won’t wait for hours at a mass vaccination clinic. Some people are homebound. Some won’t be able to stand in long lines, or may need an accompanying caregiver.

To address concerns that people might try to jump the line claiming disabilities they don’t have, some advocates suggest that the state prioritize only certain groups, such as those who receive In-Home Supportive Services, a state program for aged, blind or disabled people that serves about 600,000 Californians.

Other advocates, however, say people should be able to “self-identify” to speed up and simplify vaccinations. The state is setting up another committee to work out those details.

As California’s COVID-19 cases continue to fall after the holiday surge, nearly 3.8 million people have received their first or second vaccine dose, less than 10 percent of the population. After lagging behind most other states in vaccination rates, California now ranks 29th nationally, Pan said this week. Vaccinations of nursing home residents and staff should be completed by the end of February, and of those in assisted living facilities by the end of March, Pan said. Vaccine supplies remain limited, however, and some counties report that they don’t even have enough to expand immunizations to teachers and essential workers who – in theory – could be immunized alongside Californians aged 65 and older.

As health officials continue making difficult decisions about which people will get the vaccine next amid so much need, Hector M. Ramirez, who attended the committee meeting virtually, commented in the meeting’s online chat: “As a Native American who is also Latinx & Disabled I have no idea what equity means anymore. I do know what grief looks like now more than ever. I have lost four family members. And fear (I) will lose more.”