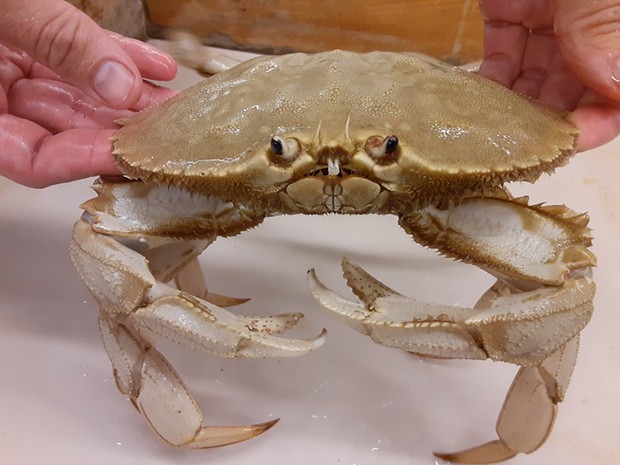 An albino Dungeness crab caught in the Bay Area was brought up to local outfit Comet Fisheries, which help revive the unusual crustacean by placing it in an aeriated tank before HSU’s Marine Lab came Tuesday to take it to a new home.

It now goes by "Butters."

The crab has been taken in by HSU's Marine Lab, which notes it is not currently open to the public due to COVID-19.


" We will keep the crab until we are able to display it to the general public," a Facebook post by the lab on the Comet Fisheries' site states.

Scott Groth, a shellfish biologist with Oregon’s Department of Fish and Wildlife (ODFW),  described them as rare, according to an announcement from the Oregon Coast Aquarium when it had one on exhibit, possibly as rare as one in a million.

“In Oregon, we harvest between 15-20 million pounds of Dungeness a year,” Groth told the aquarium. “Each adult crab averages about two pounds. That’s something like 8 million crabs annually. We receive reports of these anomalous individuals maybe two or three times a year, so the odds of finding them are quite low.”

Edit's note: This story has been updated to correct where the crab was found and the role of a local fisheries outfit.