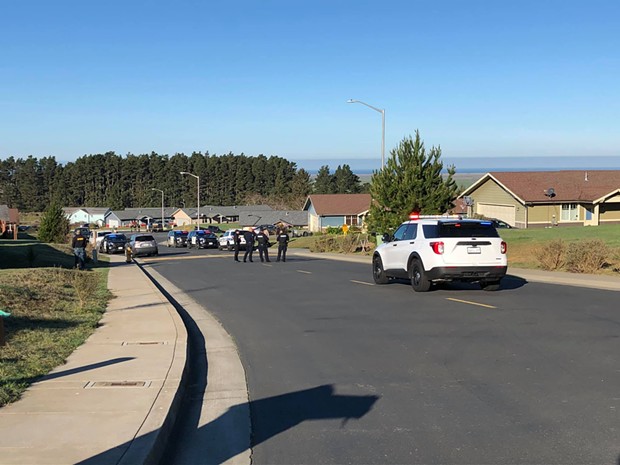 
An 18-year-old has been arrested in Utah on suspicion of murder in the deaths of three people at a home on the  Bear River Band of the Rohnerville Rancheria Reservation. Loleta resident Mauricio Eduardo Johnson is being held on a no-bail warrant. For more information on the arrest, click here.

The Humboldt County Sheriff’s Office has identified a person of interest in the triple homicide at a home on the Bear River Band of the Rohnerville Rancheria Reservation.

The victims have been identified as Nikki Dion Metcalf, 40, Margarett Lee Moon, 40, and Shelly Autumn Mae Moon, 16, Two other juveniles who were in the home were not physically injured and have been placed in safe custody, according to the sheriff’s office.

Deputies were call to the scene on the 200 block of Carroll Road a little after 8 a.m. Wednesday and found two of the victims dead and another with serious injuries, who later died after being taken to the hospital.

The official cause of death is pending until the autopsies, a news release states.

The sheriff’s office also cautioned against sharing what it described as “sensitive case information” gleaned from scanner traffic to protect the investigation’s integrity, noting that information evolves rapidly.

On Feb. 10, 2021, at about 8:12 a.m., Humboldt County Sheriff’s deputies were dispatched to the 200 block of Carroll Road on the Bear River Band of the Rohnerville Rancheria Reservation for the report of multiple victims with serious injuries discovered inside a residence.

Bear River Tribal Police Officers were first to arrive on scene and located two deceased victims- a male and a female- and a third victim with serious injuries inside the residence. The third victim, a female, was transported to a local hospital, where she later succumbed to her injuries. Officers also located two juveniles uninjured inside the residence. The juveniles were placed into safe custody.

The Humboldt County Major Crimes Task Force was activated and is investigating these three deaths as homicide. Cause of death for the victims is pending autopsy. Sheriff’s Investigators have identified a person of interest in this case, however, no arrests have been made at this time.

The victims have been identified as Nikki Dion Metcalf, age 40, Margarett Lee Moon, age 40, and Shelly Autumn Mae Moon, age 16. The Humboldt County Sheriff’s Office sends its deepest condolences to the family of these victims and to the Bear River Band of the Rohnerville Rancheria Tribe as a whole.

The Sheriff’s Office acknowledges that sensitive case information has been shared across social media by community members. For case-integrity, we are unable to confirm information shared by any person or agency that is not directly assigned to and investigating this case. We ask the community to please use caution when sharing information from law enforcement radio frequencies due to this being information that rapidly evolves. We request the community to monitor official communications from the Sheriff’s Office for case updates. Any information outside of these channels could jeopardize the investigation.