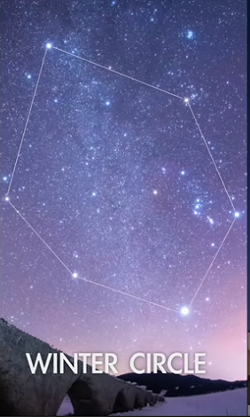 Look up in the sky tonight to watch the moon finish sashaying its way across the so-called Winter Circle — a ringed array of six stars — as it heads toward becoming full by Feb. 27.

According to NASA, the circle of stars — also called an asterism — includes Aldebaran, Capella, Pollux (and Castor), Procyon, Rigel and Sirius and can be seen rising in the east early in the evening.

“In the Northern Hemisphere, you'll see them rising in the east early in the evening during the time of long, cold nights, and setting in the west earlier and earlier as the season turns to spring.”