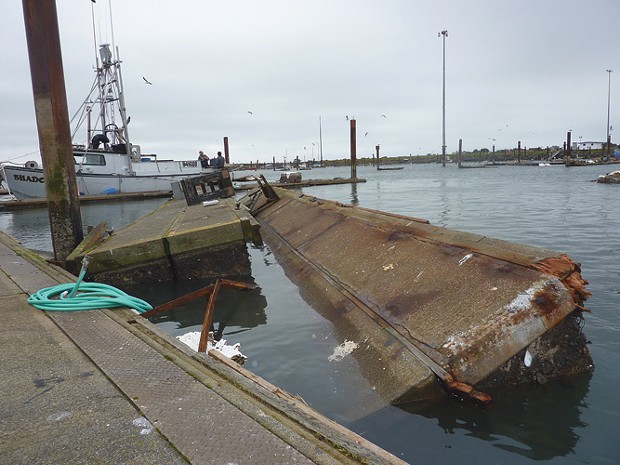 One decade ago, after the Tohoku earthquake and resulting tsunami devastated a wide swath of Japan’s Pacific coast, Futoshi Toba — the mayor of Rikuzentakata — sent out a haunting message to the world: ”We do not want to be forgotten. This is our hope.”


His city was one of the hardest hit as waves up to 62-feet high swept through the port town. Nearly 2,000 men, women and children — almost one in 10 of Rikuzentakata’s residents— were killed on March 11, 2011, including Toba’s wife. More than 3,300 buildings there were completely or partially destroyed. The city’s center was swept into the sea.


Across Japan, the loss was unfathomable: Nearly 16,000 died, more than 6,000 were wounded, whole communities were destroyed and thousands went missing.

About 10 hours later, waves generated by the same earthquake traveled nearly 5,000 miles across the Pacific Ocean to reach the Crescent City Harbor. While most of the Del Norte County-based fishing fleet was able to leave in the early morning hours before the surges hit, 35 boats were crushed and many of the docks were swept away, leaving behind $20 million in damage.

Last to leave was the fishing vessel Amanda B in a daring— and life-threatening — run.

“It was a white-knuckle experience getting out,” fisherman Alan Mello recalled in a video testimonial, one of several put together by the Redwood Coast Tsunami Work Group on a website dedicated to marking the somber anniversary. “Not one of the brighter things I’ve ever done in my years of fishing."

(Read the Journal’s March 31, 2011 story, “Last Man Out” and see video of the frightening ride caught on camera by a Coast Guard helicopter here.)

Crescent City, with its own history of destructive tsunamis, was otherwise spared.

For the most part, other areas of the North Coast were also largely left unscathed, in part because the tsunami arrived during low tide. One person, 25-year-old Dustin Douglas Weber, was killed after being swept into the ocean near the mouth of the Klamath River.

It was from Rikuzentakata and became the first documented piece of tsunami debris to reach California’s shores.

The discovery of the skiff,  called "Kamome," soon forged an international bridge between the two cities, leading to a sister-school exchange between Takata High School and Del Norte High School as well as a sister-city relationship between Crescent City and Rikuzentakata that continues to this day.

"A decade marks an important milestone after a disaster and provides a moment of attention to not only look back but also to focus on tsunami awareness and how better to protect ourselves before the next tsunami hits,” geophysicist Lori Dengler, a Humboldt State University professor emeritus and tsunami expert, says in a news release about the Redwood Coast Tsunami Working Group project to commemorate the March 11, 2011 event.

Ten years later, Toba is still mayor of Rikuzentakata, a place forever altered by the geological forces unleashed on that fateful day. In a March of 2019 Japan Today article, he recalled "how it was first time in my life I knew what true despair was."

"I evacuated to the roof of the town hall and watched as the city was swallowed up, wave by wave. People were clinging to rooftops, cars, lumber — whatever they could grab on to — and screaming and calling out for help. All I could do was yell to them, 'Hang on! Hang on! Don’t let go!' But I knew they wouldn’t survive," he said. "It was like a horror movie. I didn’t know immediately, but my wife was one of those who died. Her body was found a few weeks later. I became mayor, a widower and a single father all within six weeks. No one can possibly prepare for a major life shift such as this. My life changed forever. Everything changed."

In a message marking the approach of the 10-year anniversary, Toba offered his condolences to the quake's victims and those still searching for answers about the fate of their loved ones. He also expressed gratitude to those from around the world and in Japan who have offered their support to Rikuzentakata, which continues to rebuild.

"We will work together with the citizens to realize; 'Rikuzentakata, a city full of dreams, hopes and love that will lead to the next generation, a city of symbiosis and interaction,' where you can live in your own way while staying close to the feelings of the citizens," he wrote. "We look forward to your continued support."

One way to help those impacted in Japan is by purchasing "Tomo: Friendship Through Fiction: An Anthology of Japan Teen Stories," which includes a contribution from Journal arts and features editor Jennifer Fumiko Cahill, who was living in Japan with her family when the quake hit. Find more information here and here.