HSU Women's Basketball Team Opts Out of Competing This Season 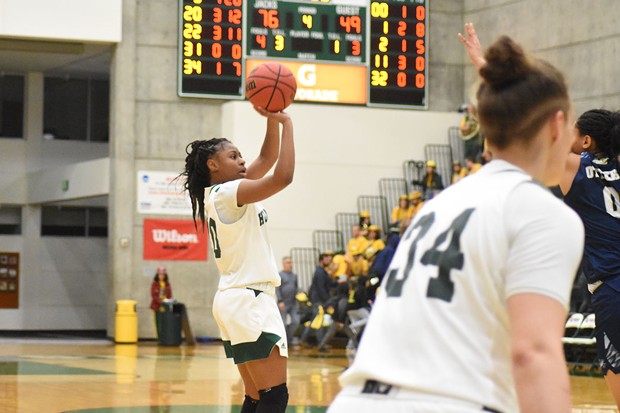 After Humboldt State University announced that student-athletes would return to competition this season, members of the women’s basketball team released a statement on their collective decision not to compete due to health and safety concerns, including injuries. 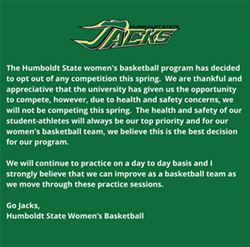 HSU’s women’s basketball coach Michelle Bento-Jackson, who’s been coaching collegiate sports since 1992 and has been head coach of HSU’s women's basketball team for five seasons, said the decision was the right one for the team, as there were some players recovering from injuries.

“This was specifically a women's basketball decision,” Bento-Jackson said. “We collectively decided that it was not the best decision for us and for a number of reasons — our roster size, injuries. There were just a number of things that came to play in conversations that we just felt that we’re really fortunate that we’re here getting to practice and that we decided we’re going to focus this spring on getting better and practicing and building our team chemistry and it just seemed like the right decision for us specifically.”

Since the beginning of the pandemic, all teams, including individual student-athletes, were given the opportunity to opt-out from participating in their sport this season, including competitions, Bento-Jackson said. For example, if any student athlete doesn’t feel comfortable returning to campus due to the pandemic, they had the option to stay home. 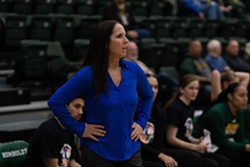 On Feb. 24, HSU announced that student-athletes would return to competition this semester with strict COVID-19 safety protocols in place, including frequent COVID-19 testing and quarantines. HSU men’s basketball team was the first to compete in an away game just a day after HSU’s announcement.

Though the women’s basketball team has decided not to compete this season, Bento-Johnson said she and her team are thankful for having the option to not compete this year and acknowledged the university and the athletics department’s efforts in ensuring the safety of HSU athletes returning to competition.

“I'm really happy that the other athletes are getting out there and our men's basketball team already did, some of our other teams are going to be competing and I think that's awesome,” Bento-Johnson said, “We're very fortunate that our department has put us in a position — I mean there's a lot of schools that can't compete — and we're very fortunate that we’ve been put in a position where we have that option, whether we want it to compete or not, and for that, we're really thankful.”