Democrats Have Newsom's Back as Recall Campaign Ramps Up 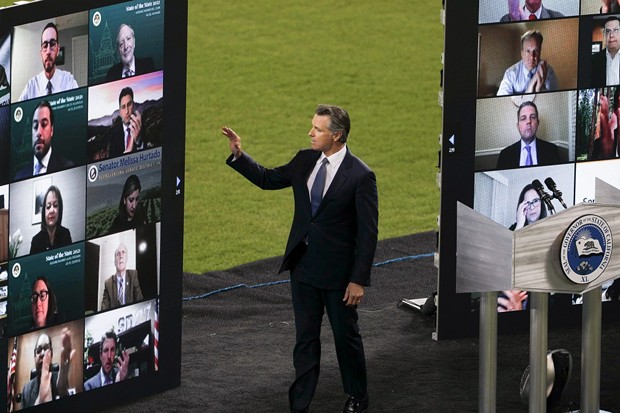 Gov. Gavin Newsom officially launched a campaign Monday against the effort to oust him from office, as fellow Democrats closed ranks to support him and his opponents plan this week to submit the last batch of signatures needed to trigger a recall election.

Since Newsom’s flashy State of the State speech last week that looked like an unofficial campaign kickoff, prominent Democrats across California and the nation have thrown their weight behind the governor and against the attempt to recall him. Their strategy in this deep-blue state that twice resoundingly rejected Republican former President Donald Trump: Portray the recall as a MAGA-inspired movement full of QAnon conspiracy theorists and anti-vaxxers and try to unify Democrats against it.

Whether Newsom’s game plan will work will likely depend on how quickly California bounces back from the coronavirus pandemic that’s shuttered many businesses and schools — as well as who steps up to try to replace Newsom on the recall ballot. His campaign launch seemed designed to thwart potential challengers from the left, featuring support from progressive national Democrats including U.S. Sens. Elizabeth Warren and Bernie Sanders and former Georgia lawmaker Stacey Abrams.

Warren promoted the new anti-recall website and told her 5.7 million Twitter followers that “extreme right-wing Republicans” are trying to recall Newsom “because he dares to listen to scientists and fights to put power in the hands of working people.”

“Let’s have Gavin’s back,” Warren added.

The California Democratic Party dumped $250,000 into the anti-recall effort Monday and Newsom took to friendly national TV shows to hammer the message the GOP-led recall is a “partisan political power grab.”

On MSNBC, Newsom highlighted the Proud Boys and other white supremacist groups that took part in the January insurrection at the U.S. Capitol and that he said are supporting the recall. “I’m taking it very seriously,” said the governor, who is scheduled to appear today on “The View.”

“If the recall should qualify, we will organize a statewide campaign to ensure that African-American voters understand that recalling Governor Gavin Newsom is not in our interest,” said Los Angeles Rep. Karen Bass, one of several Black Democrats who participated in a Zoom press conference to denounce the recall. “We will crush it because we will be united.”

Bass and Rep. Barbara Lee of Oakland made clear they’re with Newsom, after many African Americans expressed disappointment that the governor didn’t pick one of them to fill the Senate seat left vacant by Vice President Kamala Harris.

(For good measure, Newsom said in his MSNBC appearance that he will appoint a Black woman to the Senate if Sen. Dianne Feinstein retires.)

State Treasurer Fiona Ma and Controller Betty Yee spoke out in favor of Newsom, after being seen as potential candidates to replace him on the recall ballot. “I stand with my brothers and sisters and ask everyone to spread the word and vote no on the recall,” Ma said at a recent press conference.

She then backed it up with a $10,000 donation to a committee opposing the recall.

Democratic Assembly Speaker Anthony Rendon also gave $10,000 to fight the recall — a sign that more money to help Newsom is likely on the way from the Legislature’s supermajority Democrats.

It’s the opposite of what’s happening in New York, where Gov. Andrew Cuomo is now facing an impeachment inquiry over allegations that he sexually harassed several women and covered up nursing home deaths from COVID-19. Cuomo is facing calls to resign from his fellow Democrats, while Newsom’s fellow Democrats — even those who have been critical of his pandemic response — are lining up to support him.


The recall election has not officially been declared.

Election officials must first verify the submitted signatures and determine that at least 1.5 million of them are legit; they’re expected to issue a final count next month. But recall supporters say they’re submitting more than 2 million signatures, so it’s likely to land on the ballot this fall.

“Newsom has got to be held accountable for what’s happened the last 12 months,” said Dave Gilliard, a Republican consultant working on the recall campaign.

He pointed to California’s slow vaccine rollout, fraud-plagued unemployment system and delays in reopening most schools — as well as Newsom’s infamous French Laundry soiree. Gilliard said 65 percent of the people who signed the petitions are Republicans, 9 percent are Democrats and 25 percent are registered without a party preference.


Funding for the recall campaign has largely come from Republicans, including the California GOP, former Arkansas Gov. Mike Huckabee and businessman John Cox, who lost to Newsom in 2018. Cox and Kevin Faulconer, the Republican former mayor of San Diego, have said they will run to replace Newsom.

But the recall is not only backed by Republicans.

Silicon Valley executives David Sacks and Chamath Palihapitiya, independents who have previously supported Democrats, also donated to the recall campaign. Some parents who said they voted for Newsom in the past are supporting the recall because they’re angry about school closures.

So a key question in the coming months is whether a candidate will emerge who could attract support from Democrats, or liberal independent voters.

“The Republicans are in favor of the recall regardless of which candidate they put up and the Democrats are still with Newsom, but there is a weaker support for the governor among younger Democrats, and if a fresh new face emerges on the left that could be a game-changer in Newsom’s Democrat support and a boost in the recall effort,” Spencer Kimball, director of polling at Emerson College, said in a statement.

Progressive tech investor Joe Sanberg — who’s flirted with running for office in the past — said during a press conference Monday with legislators supporting a wealth tax that he opposes the recall. But he didn’t explicitly rule out running.

In a new poll from Emerson and Nextstar Media Group, 38 percent of California voters said they would vote to recall Newsom and 42  percent said they would vote to keep him in office. The poll showed a heavy split along party lines, with recall favored by about 12 percent of Democrats and 86 percent of Republicans. But 39 percent of independents favored a recall, indicating that the big fight for both camps will probably be for voters who aren’t registered with either party.

A major wild card that will shape the race is how many people throw in their names to replace Newsom.

The rules of a recall election are different from a regular election because there is no run-off. Voters are asked two questions: If they want to recall the governor, and who they want to replace him. If more than 50 percent  of voters say “yes” to the first question, the person who gets the most votes on the second question wins.

With votes split up among dozens — or even hundreds of candidates — it may not take many votes to win. It’s even possible that the winner could get fewer votes than Newsom.