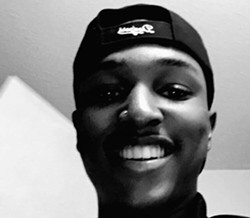 David Josiah Lawson's mother is intent on both making sure Humboldt County never forgets his name and giving back to the community that has embraced her, echoing her calls for justice.

Lawson, a 19-year-old Humboldt State University sophomore, was fatally stabbed at an off-campus party April 15, 2017, in a case that remains unsolved with charges dismissed against its only named suspect. To mark the fourth anniversary of her son's death, Charmaine Lawson has planned a day of events in the Arcata Plaza on Saturday, April 17.

Because her son ran track and loved the outdoors, Charmaine Lawson said she's been training to run the Los Angeles Marathon in his honor and decided to hold a 4-mile run/walk to mark the four-year anniversary.

"You can run, you can walk, you can skateboard — bring pets, kids in strollers — it's going to be a fun event," she told the Journal. "It's about being outside, exercising, making sure people are staying healthy."

The run/walk will begin at noon at Arcata City Hall before heading to the Humboldt Bay Trail and the Arcata Marsh.

Then, at 2:30 p.m. (once the farmers market wraps up, as Charmaine Lawson said she didn't want to interfere with people enjoying the market), there will be a vigil on the Arcata Plaza with a keynote speaker, music and outreach services to those in need.

Charmaine Lawson said she can't do the coat drive for the poor she's done the last few years because of COVID-19 but this year has packed 100 backpacks with toiletries, blankets and gift cards and plans to give them out to people in need during the vigil, which will also have food for those who are in need.

"I just want to give back, give back in honor of DJ," she said. "DJ was a giver. He had an amazingly big heart."

Anyone looking to contribute can bring a new sleeping bag or a gift card to a local restaurant or grocery store to donate, Charmaine Lawson said, adding that those looking to volunteer with the run/walk can show up at city hall by 11 a.m.

Charmaine Lawson said she's looking forward to being back in Humboldt County, where she says she'll never stop pushing to find justice for her son.

"I just want the community to come out and remember DJ and celebrate him and know that he's not forgotten," she said.