UPDATE: Woman Arrested on Suspicion of Attempted Murder, One of the Boys Stabbed Flown Out of the Area 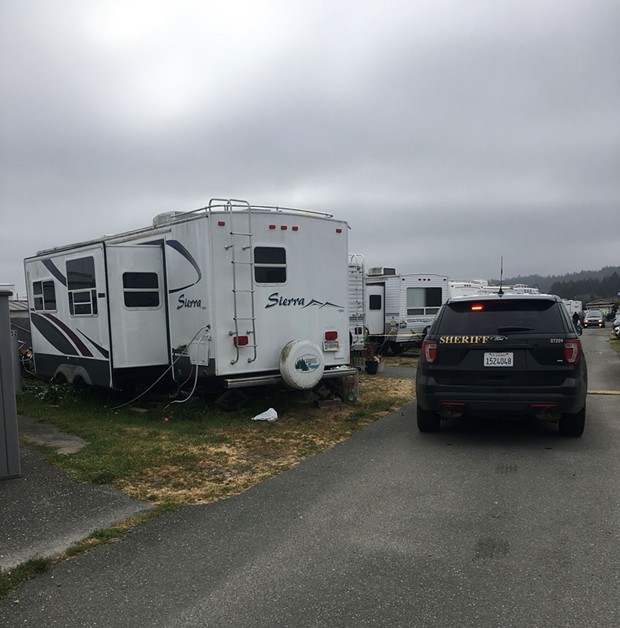 One of the two boys stabbed today has been flown out of the area for treatment and the 29-year-old woman suspected of inflicting the injuries has been arrested on suspicion of attempted murder, assault and other charges.

According to an update from the Humboldt County Sheriff's Office, the boys are in stable condition and expected to survive. They have been placed in protective custody.


The suspect, Daisy Mae Opal Leen, is related to the 7 and 11 year old, although authorities did not specify how.

Two boys were taken to the hospital this morning with "significant laceration injuries" after Humboldt County Sheriff's Office deputies responded to a King Salmon resident just before 9 a.m. today on a report of a stabbing.

The conditions of the 7 and 11 year old were not immediately available.

According to a HCSO news release, a 29-year-old woman, who is related to the boys, was detained at a gas station on the 4100 block of Broadway, where she was brandishing a knife.


"Upon further investigation, law enforcement learned that the female had been provided transportation by a motorist to the location from King Salmon," the release states. "Based upon information obtained, the female was determined to be the suspect of the incident in King Salmon."

Read the  two HCSO releases below:

Daisy Mae Opal Leen, age 29 of Eureka, has been booked into the Humboldt County Correctional Facility in relation to this morning’s stabbing investigation. Leen was booked into the facility on charges of attempted murder (PC 664/187(a)), assault with a deadly weapon other than a firearm (PC 245(a)(1)) and inflicting injury upon a child (PC 273d(a)), in addition to a warrant on unrelated charges of PRCS Revocation (PC 3455(A)), evading a peace officer (VC 2800.2) and driving under the influence (VC 23152(F)). The two juvenile victims are reportedly in stable condition and are expected to survive. One juvenile has been airlifted to an out-of-area hospital due to the extent of his injuries. Due to the relationship of the juveniles and the suspect, the victims will be placed in safe custody.

On April 21, 2021, at about 8:50 a.m., Humboldt County Sheriff’s deputies were dispatched to a residence on the 1800 block of Buhne Drive in King Salmon for the report of a possible stabbing with two injured juvenile victims. While responding to the incident, deputies received information that a 29-year-old female was currently at a gas station on the 4100 block of Broadway Street in Eureka brandishing a knife. Officers with the Eureka Police Department responded to the gas station and detained the female. Upon further investigation, law enforcement learned that the female had been provided transportation by a motorist to the location from King Salmon. Based upon information obtained, the female was determined to be the suspect of the incident in King Salmon. Meanwhile, at the residence in King Salmon, Sheriff's deputies located two juvenile males, ages 11 and 7, with significant laceration injuries. The juveniles were transported to a local hospital for emergency treatment and are in unknown condition at this time. The juveniles have been confirmed to be related to the suspect. This incident is still under active investigation and more information will be released when available. Anyone with information about this case or related criminal activity is encouraged to call the Humboldt County Sheriff’s Office at (707) 445-7251 or the Sheriff’s Office Crime Tip line at (707) 268-2539.