A 'Way of Life at Risk': A Yurok Tribal Member's Congressional Testimony

The catastrophic drought that is striking the West seems to have gotten the attention of Congress.

On May 25, North Coast Rep. Jared Huffman chaired a virtual bipartisan hearing on the status of drought conditions in an area that extends from the Rio Grande to the Pacific Northwest. Huffman is no stranger to environmental issues, being a member of several congressional committees and subcommittees that supervise federal water projects, fisheries management, coastal zone and oceans policy, and wildlife and endangered species.

The hearing of the Water, Oceans and Wildlife Subcommittee Huffman chairs, consisted of nine expert witnesses, who each gave five minutes of testimony. It was followed by two hours of discussion and questions from members of Congress, some thoughtful and some critical, and occasionally reminding the viewer of an overcrowded lifeboat.

One of the expert witnesses was Amy Cordalis, counsel for the drought-ravaged Yurok Tribe. Wearing a traditional Yurok woven cap, she described the effects of watching a river starting to disintegrate in front of her eyes.

“From time immemorial, the Yurok lifeway has centered around the Klamath River. Drought puts our natural resources and way of life at risk,” she said. “The Yurok Reservation is in one of the most remote areas in California. We are hundreds of miles away from state or federal offices. The tribal government responds to emergencies like drought. In the next few months, we anticipate hundreds of homes will be without drinking water because the streams will run dry.

“Fire risk is extremely high,” she continued. “Last year, the Yurok Reservation was surrounded by wildfires for days and experienced the worst air quality on the planet. For two weeks, the reservation and surrounding areas were covered in a shroud of smoke. Many community members are still suffering from the health problems caused by such poor air quality. We anticipate this will happen again and are making preparation.”

She emphasized that the tribe needed funding if the commercial fishermen and their families were to survive the drought.

“Fish disease is rampant on the Klamath River,” she said. “We have already lost nearly an entire class of baby salmon from fish disease. This will have a long-term impact on the Klamath stock, reducing the size of future harvests available to tribal and offshore commercial fishermen. Adding insult to injury, the remaining and the returning 2021 adult salmon class is historically low. As a conservation measure, the tribe canceled its 2021 commercial fishery. The is the fifth year in a row the tribe has not had a robust viable fishery and we have lost millions of dollars as a result.” 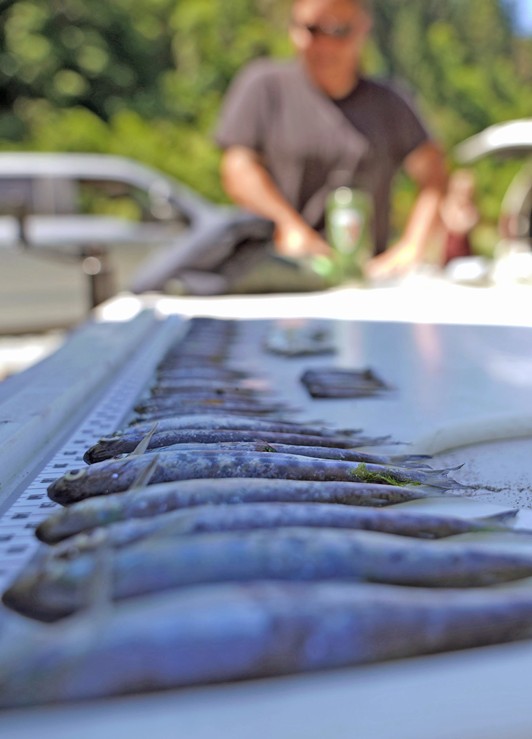 The present catastrophe, while amplified by nature, has its roots in decades of misguided federal policies.

“Watersheds throughout the west are over-developed, over-appropriated and over-stressed,” she said. “We have overbuilt infrastructure, over promised water supplies to the detriment of our own health and the planet.

“On the Klamath, every year water demand exceeds water supplies, and the fish, the ecosystem, are repeatedly provided bare minimum,” she said. “This approach, along with drought, has put salmon on a trail toward extinction. Historically the Klamath River was the third-largest salmon producing river on the West Coast. Tragically, it’s estimated only 2 to 5 percent of the salmon runs remain today.

“The salmon have been annihilated by the federal government’s development and operation of the Klamath Reclamation Project, the Klamath River Dam, the Trinity River Division, and water diversions on key tributaries such as the Shasta and Scott rivers. These projects have destroyed salmon habitat. … Drought exacerbates these problems by threatening to reduce minimum in-stream flows to levels experts predict will not only kill more salmon but result in the ecological collapse of the Klamath River.

“We must plan for drought and our plan must equally value the needs of our planet with our own because the two are the same.”

She later reminded the members of Congress that it was their legal duty to protect the Klamath River fishery.

“The federal government made a promise to my ancestors when the reservation was created in 1855 to preserve our way of life, our fishing way of life, and as I reported in my testimony there are only 2 to 5 percent of the historic salmon run left in the river,” Cordalis said. “The federal government has a trust responsibility to the Yurok Tribe to protect our fishery and historically has not exercised that trust responsibility in the proper way.“

Huffman noted the situation has economic impacts, too.

“On the reservation today, where the medium income is $11,000, many families rely on the fishery to pay their basic bills,” he said. “Yurok fisheries will be closed once again. Worse than that, fish disease has broken out once again and is killing most of the baby salmon in the river. Those are the fish that would be needed to support the fishery in coming years.”

Huffman said upstream farming communities are also suffering from the drought, and he hopes to find a way to break the cycle of litigation over water use that has plagued the northwest for years.

He observed that climate-change caused drought should be seen as the “new normal.”

“Pretending that this problem will go away if we just weaken environmental laws or build another huge dam is a form of denial that we cannot afford to indulge,” he said.