Before I purchased an iPhone 12 Pro, I was curious about the “night mode” that Apple had introduced in the previous model — how good was it? How would it stack up against my Nikons for the kind of nighttime photography I love so well? The reviews were very favorable, and many included amazing nighttime photographs shot using night mode. Could professional-level nighttime photography be built into such a small and useful device as an iPhone? I wanted to know. So I found out for myself.

This review is an entirely subjective comparison between the Apple iPhone 12 Pro night mode and the Nikon D750 and D850 DSLR's*. I wanted to find out how night mode performed the way that I would like to use it, which right now is nighttime landscape photography. Bear in mind that the iPhone 12 Pro is the current “Pro” model as of this writing (May of 2021), while the Nikon D750 was introduced seven years ago in 2014 and the Nikon D850 was introduced in 2017.

Night mode is amazingly capable and fun, but it also has some serious limitations. In some situations, it is remarkably good, but in the extreme low light of a moonlit landscape it will lose a lot of detail and produce a lot of digital noise. Using the iPhone’s built-in Camera app, night mode becomes available when the iPhone’s light meter detects a low light situation. In night mode, the camera will take a series of shots of the scene using different exposure settings, and then intelligently create the best image that it can from the series (an example of “computational photography”). The photographer can choose the duration of the night mode process, but one cannot adjust the actual shutter speeds involved. 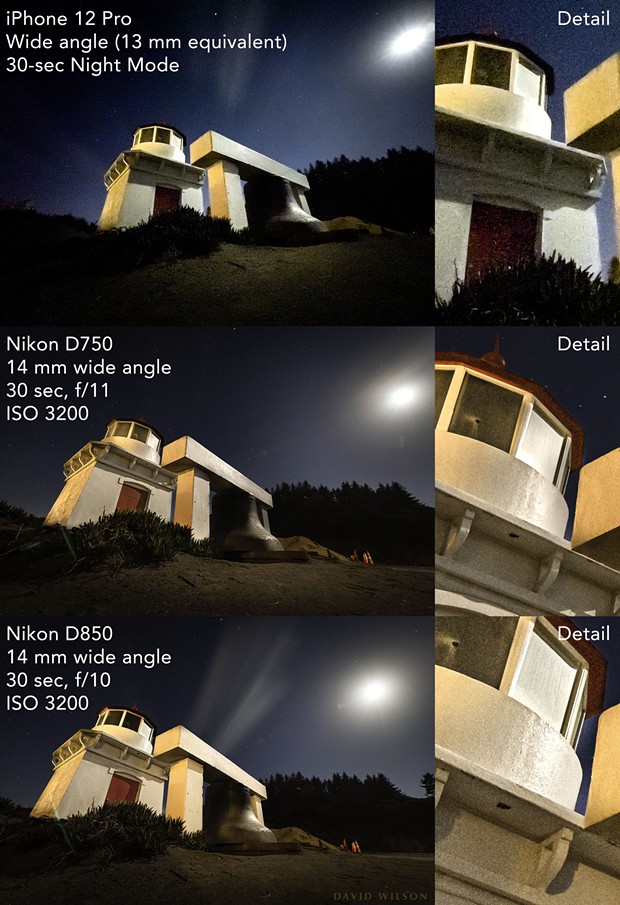 Longer durations allow objects that are in motion — like the cars and clouds shown — to blur as they move through the frame, but one has no control over the actual aperture, ISO and shutter speeds involved in any of the shots that make up the final night mode image; these will be automatically set by the camera.

Night mode shines best outside at night in fairly well-lit environments like city streets or similar areas such as the Woodley Island Marina examples included. It is also best if you can mount the iPhone on a stable tripod, but it will perform admirably even hand-held in those situations if you’re steady, as my 5-second and 10-second hand-held examples attest. Night mode falls utterly flat for my purposes when photographing landscapes, even under an 84 percent waxing gibbous moon. It leaves most of the shadows dreadfully  underexposed and full of noise. One can eliminate the noise in Adobe Lightroom, but it requires a very heavy setting that wipes out far too much detail, leaving the images looking unnaturally smooth, like plastic. Indeed, in other reviews I have seen online, the landscape photos have just that look. In my Trinidad Lighthouse image, I deliberately left most of the noise in to preserve more image detail. Editing is always a matter of personal taste.

What one considers “good enough” is both subjective and dependent on the intended use. I would not want to depend on the iPhone 12 Pro’s night mode to produce a nighttime image that I intended to print very large. There is simply too much noise when it is underexposed. Under ideal conditions, it can capture images that would make decent enlargements, but the real world often deals less than ideal conditions. 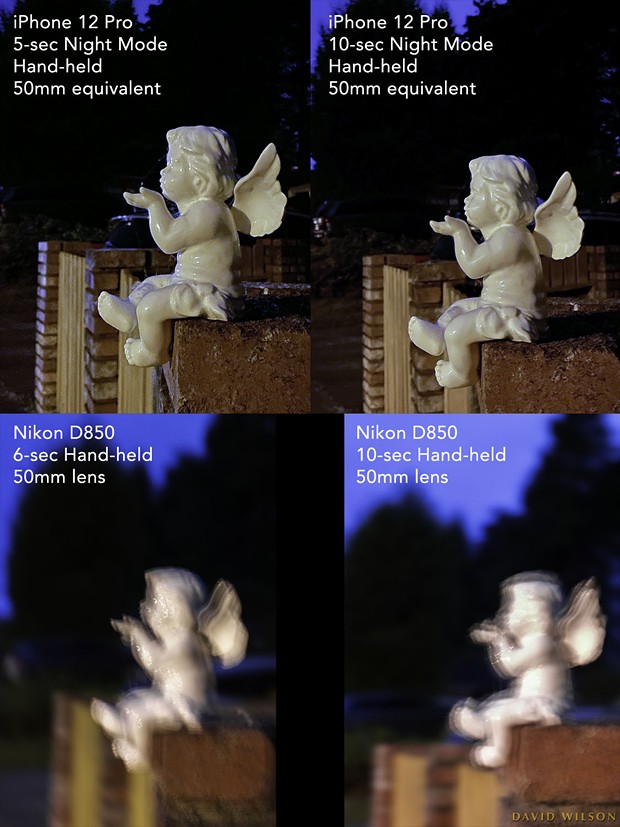 Is night mode a “professional” feature? I will say this: if you’re a professional and you find yourself out at night with something to photograph, and all you have is your iPhone 12 Pro, then it’s professional. A professional photographer wants to create the best images possible, and if one didn’t have a DSLR or modern mirrorless camera handy, then night mode could get one by in many cases.

In brighter nighttime situations such as scenes with city lights, night mode does amazingly well — extremely well for a phone camera. And if you need to hand-hold your camera for a several-second exposure, night mode on the iPhone 12 Pro will produce an image with very little motion blur — while my Nikons yielded extremely blurry images in the same situation. That could very well save professionals who find themselves without their real camera or a tripod.

But for all other low light occasions, if you also have your DSLR, a tripod, and the time, the DSLR will give you better results; the Nikons produced much larger, crisper, richer, and less noisy images. Except when it came to hand-holding the camera for multiple-second exposures, where the iPhone 12 Pro’s night mode did a phenomenally better job, there was really no contest. 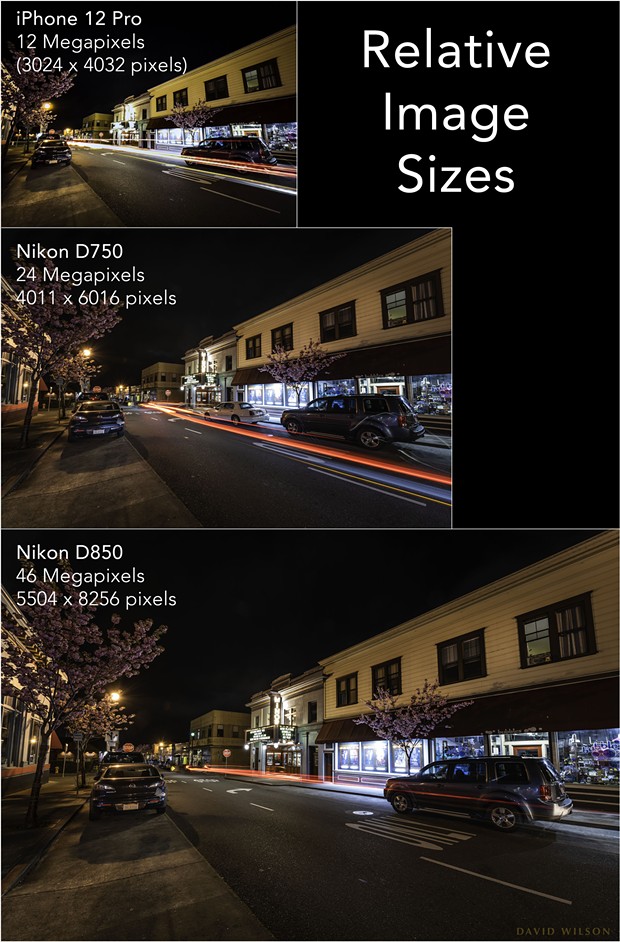 Notes: All images for this review were shot in RAW format (except for the iPhone angel photos; those were shot in Apple’s regular .HEIC format (I forgot to change it to RAW). Because editing is important to my process, all images have been edited with the attempt to show them at their best — just as I would for any other purpose — with particular attention to maintaining detail in highlights and shadows.

* “DSLR” is short for “digital single lens reflex”; you may recall that 35mm cameras were SLRs (with the exception of point and shoot cameras). I used DSLRs in this comparison because that is what I have, but having seen many results from modern mirrorless cameras, I am sure most current models would produce results similar to my DSLRs; the differences between the mirrorless cameras and my cameras would be minor compared to the difference between my cameras and the iPhone 12 Pro’s night mode.