Humboldt Crabs Back With a Bang Winning First Series

Baseball and beer were back at the Arcata Ballpark this weekend as the Humboldt Crabs were up to their usual winning ways to get the season started taking two out of three games against the visiting Lincoln Potters to win their first series.


For the first time since 2019, fans were welcomed back into the ballpark at limited capacity to watch the Crabs play baseball after taking a season off during 2020 due to COVID-19. With Friday and Saturday’s games sold out before gates open, the Crabs faithful were clearly ready to get back to what they do best; heckle the visitors, enjoy some libations, and watch some classic summer baseball.

The Crabs dropped their first game of the season 5-9 to the Potters Friday after giving up runs late in the seventh and ninth innings in what was otherwise a close offensive game. Cade Van Allen got the first start for the Crabs and held the Potters scoreless until the fourth inning after the team took a 2-0 lead in the first inning. The Humboldt bats fell silent for much of the middle innings and despite tying the game at 5-5 in the seventh, the Crabs couldn’t hold the lead even with the strong start Van Allen provided. 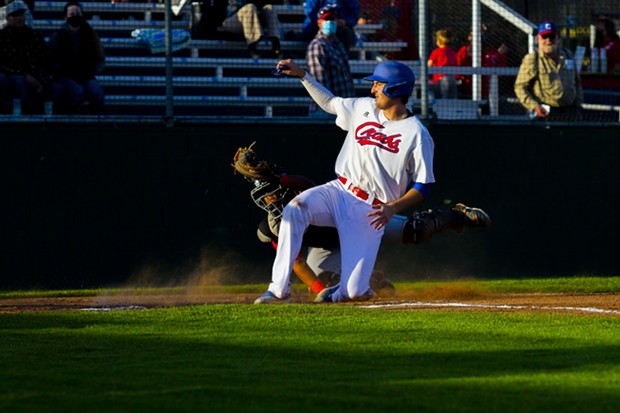 Where the Crabs did struggle on opening night was the defensive side of matters, with three errors on the night and several other miscues in the infield. While the somewhat shaky play may have concerned fans on Friday night, the team only practiced together for the first time on Wednesday, just two days before the season started and fortunately the defense did improve as the weekend progressed. 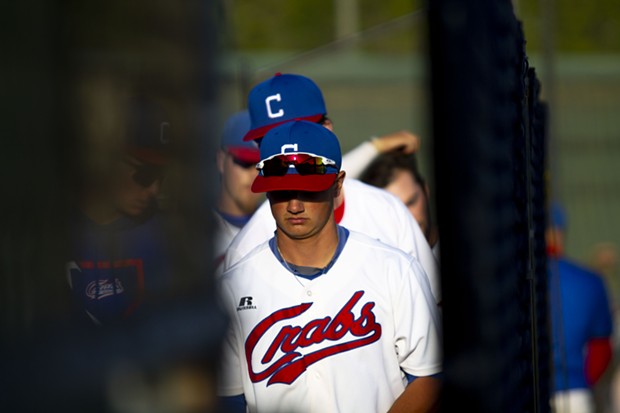 Game two of the season Saturday was a much more defensively sound affair for the Crabs and their pitching staff as they held the Potters to just a single run with starting pitcher Cole Tremain putting in five solid innings of work without giving up a run before handing the ball over to teammate Manny Casillas. In the end, it was a comfortable win for the Crabs only giving up a solo home run to Potters second baseman CJ Valdez in the sixth inning while already leading.


If the second game of the season was comfortable, the third was anything but, as a marathon effort by both teams would last until the 13th inning on Sunday afternoon. The Potters put up four runs on Crabs starting pitcher Owen Stevenson in the first two innings but didn’t score again for the rest of the day as Stevenson pitched into the sixth inning before giving the ball to a bullpen that gave up only three hits for the rest of the game.


Eureka local Ethan Fischel was the hero of the day as he knocked in the winning run ending a seven-inning deadlock to secure the game and the series with a line drive that dropped into center field perfectly between the outfielder and the second baseman for the Potters before being swarmed by his teammates.


Having grown up watching the Crabs and going to camps as a kid, Fischel said it was a dream come true to play for the team.

“I went to Crabs Camp my entire life,” Fischel said. “Always came out to the games. You know you grow up in Humboldt and as a baseball player — you always want to play for them so it’s a dream come true.”


“It feels great,” Fischel said after the game. “I mean the pitchers were absolutely amazing after going down four runs in the first two innings and then 10 innings of scoreless baseball from the pitching staff. It was outstanding. So they kept us in it and I was just happy enough to end it.”


Luckily for fans, they had even more to cheer for from the local side of things as fellow Humboldt local Aidan Morris put up a multi-hit game going 2-for-3 with a double and scoring a run as well as making an impressive diving play to record an out in foul territory in the third inning.

“The fans have been awesome as always,” Morris said about being back in Humboldt to play for the Crabs for a second season. “Always being loud, always in the game. It’s a great time.”


After a slow start to the season on Friday and sitting out Saturday night, Morris came into Sunday hoping to change things up and make some more noise around the bases.


“I had a slow game out on Friday and I just wanted to come out here and bang the ball around a little bit and have some fun,” Morris said.


For Crabs Manager Robin Guiver, it was a good feeling to be back at the ballpark with a new group of players to settle in for a full season.


“It was a long year being away,” Guiver said on Sunday after the game. “It’s just great to see the Arcata Ballpark come back to life doing our thing so it’s awesome. We’re really happy to be back on the field.”


With the Potters having not lost a game until they came into Arcata, it was always going to be a steep learning curve for the Crabs with such short build up, but Guiver was happy to have taken the first series of the year.


“Lincoln is a really quality team, they’re good,” Guiver said. “After losing opening night, I knew we were going to have a battle on our hands trying to get any wins. And to get two out of three was a sweet way to end the weekend.”