Crabs Sweep the Week Despite Injuries

The Crabs have kept the train rolling through the halfway point of the season, picking up another five wins this week to bring their current record to 22-5. The team put up another impressive scoring performance for the week, scoring 65 runs to make it their second consecutive week putting up 60 or more.


The Crabs were bolstered Tuesday night by the return of Andrew Allanson to the lineup following his concussion from the previous week. Allanson made sure his comeback was one fans would remember by picking up right where he left off and blasting a home run over the fences at Arcata Ballpark against the Perth Heat's right. For Allanson, it was a fitting way to get back on the field.


“It really felt like a welcome back present honestly, hitting a home run my first game back from a concussion,” Allanson said after Sunday’s game. Allanson wasn’t the only Crab to go deep Tuesday, either. First baseman Gabe Giosso had a standout night with three home runs, including two in the third inning alone, to lead the team with eight RBI’s to a 22-1 win. Giosso, who is more than occasionally referred to as “Beast” around the Crabs dugout, said he had never hit two home runs in a single inning before but that the kind of offense he and the team as a whole are producing comes from confidence in their abilities.


“A lot of it is just confidence,” Giosso said following Sunday’s game. “And depending on what the situation in the game is trying to get a job done instead of going up there and just swing to swing. Going up with a plan and knowing what the pitcher is doing and executing from there.” Wednesday featured another lopsided score by the time the final out was recorded but the Crabs trailed through the early innings after the second inning got out of hand. For home fans, it was one of few times that they have seen the Crabs down and have to work against the scoreboard. The morale never seemed to waver in the dugout, though, and in the end it was third baseman David Morgan who led the way for the Cabs with five RBI’s to break himself out of a batting slump and help take the team to an eventual 17-9 victory.


Unfortunately, Morgan was the first Crabs player of the weekend to suffer an injury as he attempted to leap over the Petaluma Leghorns catcher while the game was still close, launching himself into the air and landing hard on his wrist. Morgan continued to play through the rest of Wednesday’s game but came out of the lineup for the rest of the weekend. The Crabs kept their winning ways going against the Seals Baseball Team, which returned to Arcata Ballpark for a second series, and managed to play the Crabs hard all the way through. The Crabs took the first game 16-2, with much of the damage done in an exceptionally strong seventh inning that saw them score 10 runs. It was a relatively simple approach for the Crabs bullpen for game one, with starting pitcher Kaden Riccomini going six innings and giving up just four hits before handing the ball off to Wesley Harper who threw the last three innings and allowed just one hit himself.


Saturday’s game threw a few curveballs toward the Crabs and required some seventh inning clutch hitting from Giosso to break a tie and give them the 6-5 advantage they would need to win the game in a welcome break from the blowouts. The first bit of bad news came in the bottom of the second inning when outfielder Josh Lauck came sliding into home to score and the catcher’s spike came down on his hand, cutting into his left index finger. After popping up from the slide, Lauck immediately headed into the clubhouse for medical attention. He exited the game to receive further treatment and stitches after having the wound attended to by Crabs medical staff. At this stage, it’s unclear what a timetable looks like for Lauck to return, but it seems probable that the well-liked outfielder will be out for the next week or two. Starting pitcher for the night Manny Casillas also had a difficult game and was only able to work into the fourth inning as lingering soreness meant the control that he normally displays wasn’t nearly as sharp as Crabs fans have seen earlier in the season. And in his first game back behind the plate catching after a concussion, Allanson took at least two balls off of his mask. Fortunately while a bit shaken up, he was cleared to continue to play and didn’t have any further issues.


“It shook me up quite a little bit,” Allanson said following Sunday’s game. “But I didn’t feel any symptoms from the concussion and I was able to play today.”


Players like Casillas and others on the Crabs roster spend almost the entire year playing baseball or training between seasons, which wears on the body. The injuries this week stressed that even more, which is something Crabs Manager Robin Guiver is well aware of. He's hopeful for players to return to the lineup but also confident in other healthy players being able to step in wherever needed.


“I think at this time of the year everybody’s a little bit tired just naturally,” Guiver said after Sunday's game. “And then we had a couple guys with some injuries. So we’re kind of waiting to hear back on how long they’ll be out, that kind of thing. But we’ve got a bunch of good baseball players. We’ve got guys on the bench ready to step up and keep it rolling.”


The Crabs wrapped the weekend up with another close 4-2 win behind starting pitcher Owen Stevenson to complete the sweep with steady pitching and solid offense that Guiver was happy to see.


“It was nice to play a one-run game yesterday and two-run game today and a good job pitching,” Guiver said. “Their guy today did a good job on the mound. Just kind of keeping us off balance and controlling the running game we got on, picked a few guys off and kept us slowed down a little bit on the bases. But all in all, got a sweep against the Seals, so a good weekend.” 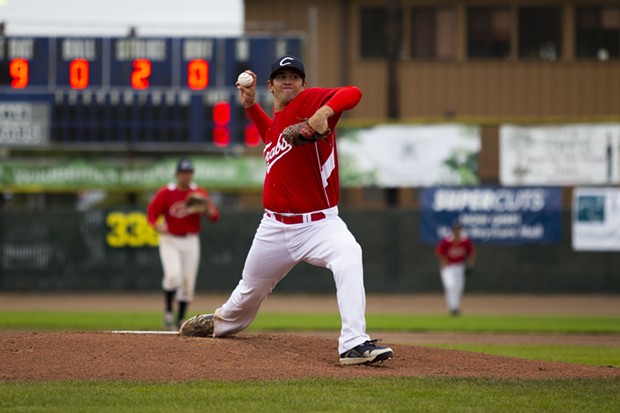 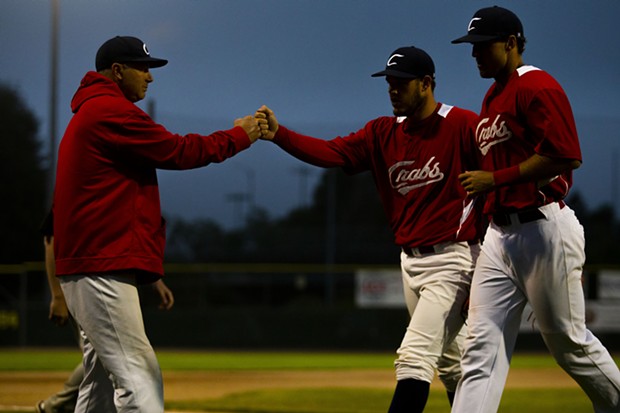