The Crabs have kept their win streak going with extra inning antics and big time at-bats from up and down the lineup. The team started off the week hosting the Redding Tigers once again at Arcata Ballpark for a two-game set. After sweeping the Tigers during their first trip to Humboldt, the Crabs looked set to keep that winning record going without trouble, and were leading by six runs going into the top of the ninth inning. That’s when things got more interesting than the Crabs might have hoped for, as the Tigers roared back to score six runs on the inning to tie up the score at 8-8.

It looked like the Tigers may have gotten the final say in matters when an error in the top of the tenth inning put them in scoring position before a double drove in a run to make it 9-8 in favor of the visitors. Fortunes switched though in the bottom of the same inning when the Tigers committed an error of their own, allowing Crabs designated hitter Ethan Smith to slide into home, just beating out a bouncing ball at the plate, to bring the score even again. Finally, in the bottom of the 11th inning, Gabe Giosso worked a walk before reaching third on an error and Andrew Allanson brought him home with a walk-off single that sent the players and fans home happy with a final score of 10-9.

It didn’t take long for the Crabs to find themselves in another close game. The next night, the score was tied from the fifth inning at 4-4 and it seemed like neither team was able to generate the offense needed to break the stalemate. Enter into the equation, Giosso. The imposing bat usually stationed at first base missed the majority of the game while working on classes for his master’s degree and then came in eighth inning for Allanson and subsequently blasted a home run over the fences and onto the freeway to take the lead.


It wasn’t over yet for the Crabs either as Giosso’s monster home run appeared to put a charge in the dugout just as much as it did the crowd, and when Ethan Fischel stepped into the batter’s box, he drove the first pitch he saw over onto southbound U.S. Highway 101, as well for back-to-back bombs that took the Crabs to a 6-4 final score. For the weekend series, the Crabs took on TKB Baseball and opened the weekend with what has become a common sight with this 2021 roster, a blowout score, winning 17-3. That wouldn’t necessarily be the way the whole series went though. Saturday’s game saw the Crabs trailing from the fourth inning on. The rally started in the seventh, when third baseman David Morgan launched a home run over the fence to make the score 5-3 in favor of TKB Baseball. Smith followed that up with a homer of his own in the eighth. Then Morgan doubled in that same inning to tie the score at 5-5.

In the end, it took an extra inning of work but Dylan McPhillips was able to seal the deal for the home crowd with a walk-off home run that gave the team a 6-5 well earned comeback victory. McPhillips was confident stepping up to the plate, even telling Crabs Manager Robin Guiver that the game was as good as over before taking his at-bat.


“Before the inning started, Guiver actually asked us who’s up to bat and I said, ‘Don’t worry about it, the game’s over,” McPhillips said. “I just got in the box. I just wanted to hit the ball hard and try to get on base, get the next guy up. And happened to run into one that got out of here.” 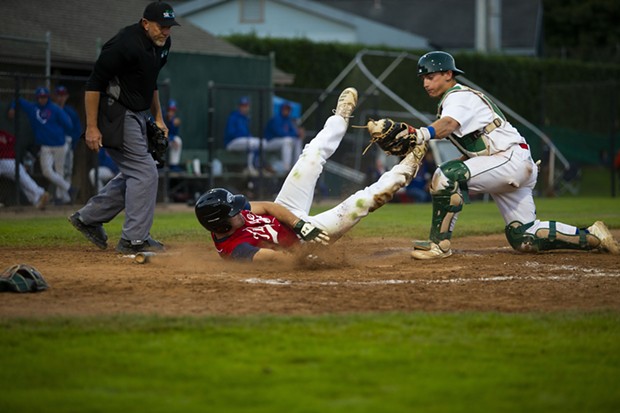 The Crabs wrapped up the series the same way they did last weekend, with a tidy shutout win led by pitcher Owen Stevenson, who gave up just a single hit on the day while being perfect through four innings and struck seven batters through his total six innings of work. The team was able to use the strength of the bullpen following Stevenson’s strong start to secure the win with Wesley Harper and Chad Wilson finishing off the game. 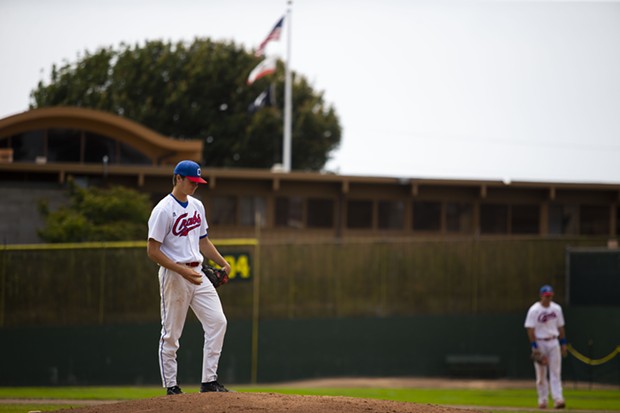 Wilson has become one of two go-to closers for the team this summer and gave up his first run of the season only earlier in the week on Friday night before walking his first two batters of the season on Sunday. Through 20 innings of work on the season, Wilson now has an unbelievable .450 ERA and has struck out 42 batters while giving up those two walks and only eight total hits.


“Playing here in front of the Crabs, it’s an experience definitely,” Wilson said after Sunday’s game. “Coming out here I wanted to put myself in a regional environment and try and compete, have the crowd behind me and see if I can still make pitches. Coming out this week facing a little competition was nice to be able and try and work on certain pitches with even guys getting on base, which isn’t something that usually happens around here.”


For Wilson, this summer season has let him reestablish his confidence and he has certainly done so in a big way as is shown by the numbers that back up his performances. He was also able to chuckle a little that the first run he did give up ended up being a solo home run on Friday night.

“It’s a funny story,” Wilson said. “Coming out here, my confidence was kind of shaken and I was kind of trying to pick things back up. And starting off the summer, I came out with the goal to kind of start working on different pitches and things started clicking from the start for me. And one thing led to another, and the kid finally got one off me, so it was funny to see.”


With the season beginning to come to the tail end with only two week remaining in the season, Guiver has been happy with the team’s performance including this weeks’ sweep and how the workload has been distributed among the players so that everyone can get in the work that they need for the summer.


“Last night [Saturday] was about as exciting as it gets in any baseball game,” Guiver said following Sunday’s game. “An extra inning walk-off and a comeback. We were down chasing four runs. Friday was a little ugly, their bullpen just kind of ran out of gas on Friday there, a little shorthanded. But a little better game today than Friday and getting a sweep is always a good thing. And two weeks to go, so we want to finish up the right way.” 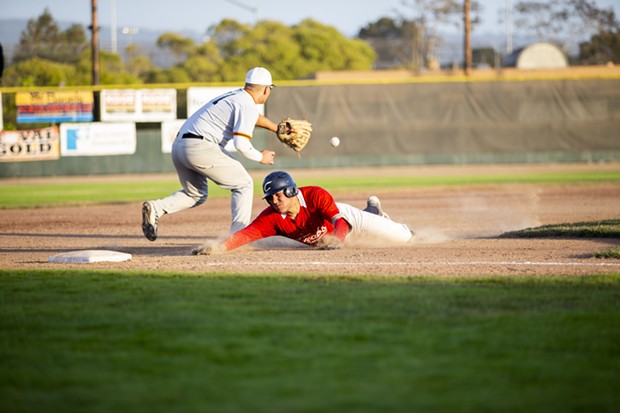