The 2021 Humboldt Crabs season has come to an abrupt end, with the final two games of the season canceled due to two positive cases among team personnel. The decision came Saturday afternoon about an hour before the team was set to meet for batting practice and it brought an early end to a memorable season that saw the Crabs finish with a record of 39-6.


With the decision being made so soon before the game that was set top happen that evening at 7 o’clock, there was no option to test everybody ahead of gametime according to Crabs Manager Robin Guiver.

“We had no way to test everybody else before the game,” Guiver said in a phone interview on Sunday. “We talked about trying to do rapid tests with everybody before the game and just logistically at the time ... it wasn’t wasn’t feasible. It wasn’t going to be able to work. The board had to go ahead and make the decision that they made. Obviously we’re all very disappointed about it. But we don’t want to let that decision damper what was a really tremendous summer for us on the field and off the field for the Crabs.”


It was an equally surprising end of the season for the players and coaches. Players were notified via text before meeting one last time at the ballpark.


“I was actually at the field getting some early work in about an hour or so before batting practice,” said Tyler Ganus, outfielder for the Crabs. “We all got a group text from Coach Guiver just saying that the season was canceled. And that was pretty much it. We had to turn in our jerseys at 5 p.m. and that was the last goodbye.” 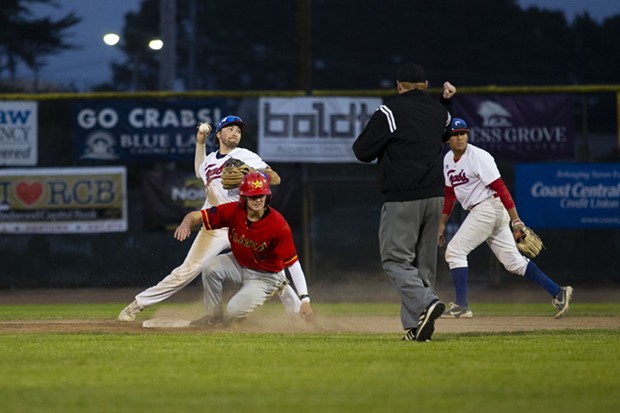 While the season did come to an unforeseen end, the performances that fans saw in the final week were exactly what they have come to expect from the team as they won their final three games against stiff competition to wrap the season on a 14-game winning streak. The Alaska Goldpanners were in town for a two-game series on Tuesday and Wednesday, and put up a fight that pushed the Crabs pitching into some make or break situations they managed excellently, even with a bullpen that was down three pitchers compared to most of the season.


Adam Walker got the start for the Crabs Tuesday, but it was teammate Wesley Harper who would come away with the win after throwing almost five innings in relief and striking out eight batters to steady matters after Walker allowed six walks. Harper, who was a reliable arm for the Crabs all summer, executed his pitches well on the mound, which allowed the team to cruise to an 8-3 win as the Goldpanners didn’t score following the third inning.

The Crabs followed up Tuesday with a combined shutout the next evening behind pitchers Caleb Ruiz, Cole Tremain, Manny Casillas and Sean Prozell, who all together gave up just one hit on the night. The performance showed the strength of pitching that the Crabs had all season as the season ended on Saturday with a 1.767 ERA and a rotation that featured seven pitchers with ERA’s below 2.0.


The final game of the season ended with a 7-1 win over the Sacramento Yankees behind a dominant performance from starting pitcher Kaden Riccomini, who struck out 11 batters on the way to the victory while the lineup put in a steady batting performance to take the lead in the first and extend it all the way through.


With that, the season was over before we even knew it. At the final out, first baseman Gabe Giosso, catcher Andrew Allanson and second baseman Ethan Fischel all remained tied at seven home runs apiece with Giosso leading the way in batting averages with .443. Chad Wilson had the lowest ERA on the team sporting a mere .360 ERA after giving up just one run on 10 hits through the entire season while striking out 52 batters.


“We definitely had some good leadership,” Guiver said. “Guys like Gabe Giosso, Dylan McPhillips, Ethan Smith just to name a few. Those guys got a lot of college baseball experience in at-bats and innings underneath their belt and kind of know what it takes. The grind of it and what it takes to deal with the ups and downs.”


For Ganus, being able to learn from experienced players on the team was a valuable part of the summer.


“I think there was great leadership on the team from a lot of the older guys,” Ganus said. “Coming out of my freshman year in Oregon put me under their wing a little bit and I think Gabe Giosso comes to mind really quickly and Dylan McPhillips, those two guys. Just being able to train with them and learn from them was really cool. Because they’re really experienced college guys, successful players and obviously really talented.”


Ganus, who resonated with the crowd at Arcata Ballpark, said the thing he'd most like to say to the fans is thank you.


“I would say thank you. Thank you a million times,” Ganus said. Because you guys make it really fun for me as someone who plays with a lot of energy and has fun on the field. It’s really nice to be able to engage with a community of people that appreciate that. I’m going to miss all of them very much. But it was definitely fun. It was a really, really memorable summer for sure because of the fans.”