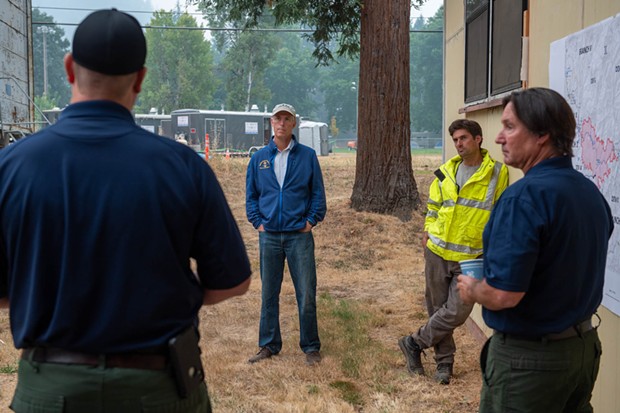 Efforts to fight the Monument Fire burning east of Willow Creek along the Trinity River have been hamstrung by a lack of personnel and resources, officials told North Coast Congressmember Jared Huffman this morning in a briefing.

“Here’s the deal, I’ve got seven crews — on a 60,000-acre fire. I’d love to have about 30 more,” explained U.S. Forest Service Operations Section Chief Steve Burns. “… We’re pretty much fighting this with 300 or less people a day who are physically fighting this fire.”

The fire, sparked by lightning July 30, has grown to 62,490 acres with 3 percent containment and has resulted in evacuation orders for Junction City, Red Hill, Canyon Cree, Cooper Bar, Big Bar, Del Loma, Big Flat, Helena, Cedar Flat and Burnt Ranch. Burns said the immediate focus was on “values at risk in the (State Route) 299 corridor,” protecting homes from Burnt Ranch to Junction City, and he said crews worked 24 hours a day and were effective.

“We were pretty much just trying to get people out and trying to save what they left,” he said, adding that only 10 primary residences were lost when hundreds were at risk. “We feel really good about that.”

Huffman asked the operations chief if crews had run into any folks who ignored evacuation orders, or any cannabis growers refusing to leave in order to protect their crops, and he indicated they had.

“They’re burrowed like ticks in some of these areas,” Burns said, adding that it greatly complicates efforts as crews then have to divert their focus away from protecting structures to getting people out safely as the fire approaches. “That’s a hazard to my firefighters. When it’s time to get out, it’s time to get out.”

In the fire’s first days, Burns said he put in an “immediate need” request for more crews and resources but “there was just nothing left in the tank,” noting that the 500,000 acre Dixie Fire and the nearby McFarland Fire had commanded much of the firefighting equipment and personnel available.

“We really just had to hold our own in here,” he said, gesturing toward the areas of Del Loma and Big Bar, about 25 miles east of Willow Creek, “and we made it through the night and nobody got hurt.” 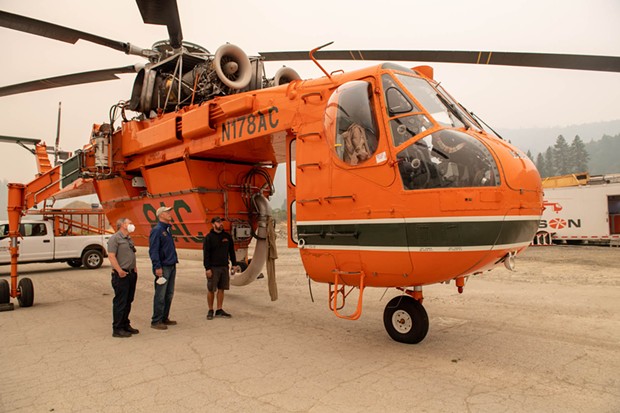 As a result, Burns said, “We couldn’t staff this side of the fire appropriately. It might have held us up somewhat but I’m not able to have firefighters out here without food and water.”

Huffman urged the command staff to reach out if they encounter any similar issues in the future.

“We’ll try to … be the squeaky wheel on your behalf,” he said. “If you run into other red tape, call me.”

Mueller later told the Journal that staffing issues are also pervasive in firefighting across the country right now, noting that he has numerous open positions he’s been unable to fill. While some of the issue is funding and pay, he said the job has also changed in recent years as fire seasons have grown longer with fewer breaks between deployments, leaving firefighters to spend longer stretches away from their families. Plus, he added, there’s been a cultural shift, noting that some younger folks won’t sign on unless guaranteed they’ll have wireless internet service at fire camps and other modern comforts.

Burns noted that even with fires moving faster th an in years past, there are only 26,000 firefighters committed nationally.

“We were lucky to get what we got,” Burns said, adding that the California Office of Emergency Services is “saving our bacon” in providing additional resources, while COVID-19 has also taken a toll, as a positive test in a Los Angeles County firefighter resulted in an entire crew being sent home.

Command staff told Huffman the Monument Fire is burning through oak timberland, mixed conifers, grasslands and brush. But the terrain is incredibly dry, they said, adding that even live fuels are basically just “living on oils.” And many areas are laden with duff, layers and layers of dry leaves, in which a fire ember can take off into a new blaze.

“When this fire breathes, it moves, and with that movement we are catching spots a half-mile to one mile out ahead of this thing,” Burns said, referencing the fire’s surge toward Junction City four nights ago. “Those spots would gain ground, then send more spots out ahead of it.”

Currently, calm winds have left a heavy blanket of smoke over the fire, which Burns said is good, as the fire needs oxygen to breathe and grow, though it does prevent crews from using planes and helicopters. But when the wind picks up and clears out the smoke, Burns said he expects the fire to be very active again, and it can happen quickly. Hot weather on the interior can pull drafts of cool air up the river from the coast, command staff said, resulting in winds of 15 to 20 mph up the valley.

Burns said crews are trying to take advantage of the smoke layer and resulting milder fire activity to clear containment lines, with the priorities being first protecting Junction City, then Burnt Ranch and then preventing spread to the south toward Hyampom and Hayfork. Preventing spread to the north into the wilderness falls last on the priority list, though Mueller said there is no intent to let anything burn.

“This is not a year to be doing anything other than aggressive full suppression,” he said.

With some containment lines being set to protect Burnt Ranch on the fire’s western edge, Burns said he’s hopeful crews can dig in.

For the latest incident information, click here, and watch a video of the briefing with Huffman below.