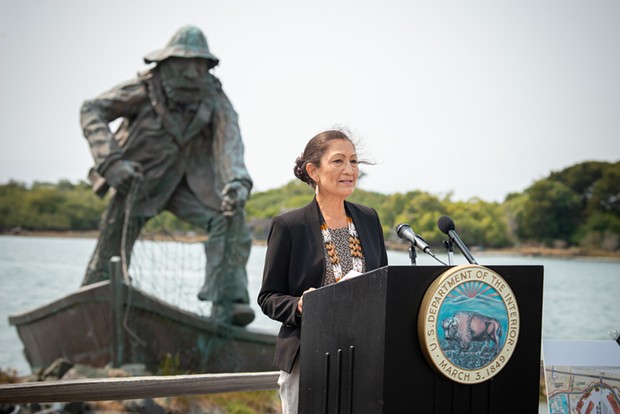 Excitement and promise were in the air yesterday afternoon as North Coast Congressmember Jared Huffman, along with U.S. Secretary of the Interior Deb Haaland, White House Council on Environmental Quality Chair Brenda Mallory and California Energy Commissioner Karen Douglas toured Humboldt Bay, getting a glimpse of where offshore wind turbines will be placed for a renewable energy project.

"It's a real honor to be here in Humboldt County, Eureka, talking about the tremendous promise of offshore wind for this region," Douglas said.  “... We are in a climate emergency. We are experiencing these heatwaves, wildfires, drought and the compounding effects of these events on our electricity system, on so many aspects of our way of life.”

Then in May, Gov. Gavin Newsom joined Haaland and other federal officials to announce an agreement that will allow for the Department of the Interior's Bureau of Ocean Energy Management (BOEM) to offer a lease auction for an unspecified site about 20 miles off Humboldt Bay, along with another stretch of area in the Central Coast to create an off-shore wind farm as early as next year, creating a tangible plan of action for offshore wind energy in California.

“We’re all excited about the possibilities of this governmental collaboration and we have shown here in California how we can get this done,” Haaland said at yesterday's press conference.

California's offshore wind energy development is expected to bring in up to 4.6 gigawatts of clean energy to the grid over the next decade, enough to power 1.6 million homes.

“Offshore wind is critical, it’s a critical component of the president’s ambitious agenda. It’s also an important opportunity for growth in the United States and, of course, for good reason,” Haaland said, adding this opportunity would bolster the economy, expand the nation’s energy portfolio and help fight climate change.

Yesterday’s message was clear: Renewable energy — especially the prospect of offshore wind farms — is necessary to help save the world from the impending and catastrophic effects of climate change.

“I’m so grateful that the Biden administration has hit the ground running … .We’re back in the business of climate leadership. We’re stepping up to this climate crisis, showing what needs to be done to seize this opportunity in the climate crisis and that brings us again, here to Humboldt Bay,” Huffman said. 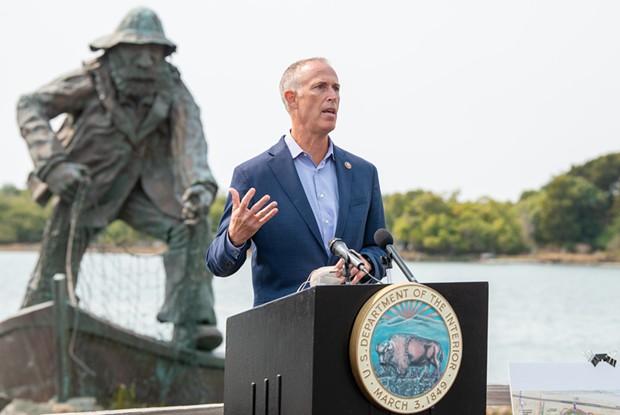 In July, the BOEM designated a 206 square mile area for the Humboldt Wind Energy Area (WEA), and is now undertaking environmental analysis for future leasing and site assessment activities. According to a Department of the Interior release, BOEM is also moving forward with government-to-government Tribal consultation.

The prospect of creating an offshore wind farm isn’t anything new to Humboldt County. Back in 2018, Redwood Coast Offshore Wind, a partnership between the Redwood Coast Energy Authority, Ocean Winds and Aker Offshore Wind, submitted an unsolicited lease request with BOEM to begin the process of creating an offshore wind farm off Humboldt Bay, but the request has essentially sat in purgatory as BOEM weighed its options.

According to a release sent by the Redwood Coast Energy Authority, the company provided “$50,000 in funding to the Humboldt Bay Harbor District to help them put together a proposal that will hopefully secure [the estimated] $66 million in state and federal funding to redevelop Humboldt’s port infrastructure to be able to support offshore wind development.”

Read both the Department of the Interior's press release on yesterday's event and the Redwood Coast Energy Authority's release on the offshore wind project below.

From the Department of the Interior:

Secretary Haaland and the group toured the Port of Humboldt Bay, the largest deepwater port between San Francisco and Coos Bay, Ore., which is being upgraded and retrofitted to meet anticipated needs of future floating offshore wind projects. The port is adjacent to an area under active evaluation by the Interior Department for future offshore wind leasing activity.

“Offshore wind will play a key role in transitioning to an equitable clean energy future. With rapid technological advances, falling costs and tremendous economic potential, offshore wind will be instrumental in the fight to combat climate change and create good-paying union jobs,” said Secretary Haaland. “Today’s visit offered a great opportunity to learn about the state’s leadership in investing in the offshore wind industry and the domestic supply chain, and the ongoing local collaboration and community partnership here in Humboldt County.”

“President Biden is taking bold action to build America’s clean energy future, and Secretary Haaland is leading the way forward on offshore wind,” said Chair Mallory. “Groundbreaking renewable energy projects like those here in Humboldt County will not only power American homes with affordable energy, but will create good-paying union jobs. While this is a step in the right direction, there is still much more work to be done to tackle the climate crisis, which is why it is so important to move forward with President Biden’s Build Back Better Agenda and the Bipartisan Infrastructure Deal.”

Open-air port terminal space and high lift capacities will be necessary for the staging, construction and deployment of floating offshore wind turbines off California’s north coast. Ports such as Humboldt Bay, and others throughout the United States, will help attract the offshore wind supply chain, create good-paying jobs and attract economic development in the local area.

Today’s event reflects the Biden-Harris administration’s commitment to develop 30 gigawatts (GW) of offshore wind energy by 2030, which will create an estimated 80,000 jobs. It also builds on the May 2021 agreement by the Departments of the Interior, Defense and the State of California to accelerate wind energy offshore the central and northern coasts of California. It comes as the Intergovernmental Panel on Climate Change (IPCC)’s recent report found that climate change is impacting the planet in unprecedented ways, with a call for urgent action across the globe.

The Humboldt WEA is approximately 275 miles north of San Francisco and begins at 21 miles offshore the City of Eureka, extending seaward out to 35 miles offshore. The WEA can support generation of 1.6 GW of offshore wind energy, enough to power more than 500,000 homes. Additional information on the Humboldt WEA can be found on BOEM's California Activities website.

EUREKA CA – August 10, 2021. Plans to bring offshore wind energy to Humboldt County have been picking up speed in recent months after years of local discussions. What started as small meetings in 2018 with local tribes, fishermen, and environmental groups about the challenges and benefits for our community has blown into being a priority for both the Biden Administration and the State of California. Most of the world is now united by the desire to dodge a global climate crisis and transition to a clean energy future.

On May 25, the Biden Administration announced that it will focus on what would be the first U.S. commercial-scale wind projects off the Pacific Coast, including Humboldt County. Today U.S. Interior Secretary Deb Haaland and White House Council on Environmental Quality Chair Brenda Mallory met with local leaders on Woodley Island to discuss a range of issues, including the need to “build out a clean energy economy and create jobs, including by spurring offshore wind development.”

Humboldt Bay is a good fit for an offshore wind industry for several reasons: there’s an excellent wind resource off our coast, a connection to the grid next to the bay, no bridge in the way of floating the turbines in and out for maintenance, and there’s ample space on the harbor for an industrial port. The Redwood Coast Energy Authority provided $50,000 in funding to the Humboldt Bay Harbor District to help them put together a proposal that will hopefully secure ~$66 million in state and federal funding to redevelop Humboldt’s port infrastructure to be able to support offshore wind development.

Discussions with local fishermen led to a Memo of Understanding in 2018 between RCEA and the Humboldt Fishermen’s Marketing Association (HFMA) to work together throughout the development of an offshore wind project. Ken Bates from the HFMA commented today that “Wind power proposals on this coast are not new, the HFMA has been engaged since 2018 with wind power advocates and local organizations concerning impacts to fishing and fishing grounds.”

RCEA intends to model how developers should engage communities on projects of this scale. Local tribes were consulted early on and will remain at the forefront of RCEA’s engagement efforts. Although every tribe will have their own perspective, Ted Hernandez, the Chairman of the Wiyot Tribe (who’s unceded land surrounds Humboldt Bay), recently publicly supported local offshore wind development.

Most recently, a network of local organizations, governments, tribes, and individuals have come together under the umbrella of the Humboldt Area Foundation to launch a central entity, the Energy Resiliency Network. As a collaborative, the Energy Resiliency Network is poised to coordinate engagement efforts regarding offshore wind that will include all the diverse values of our North Coast community. Expect to hear more about this in the coming weeks.