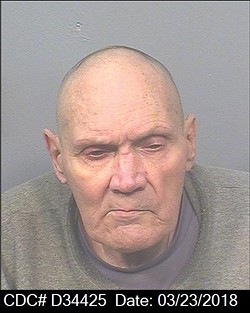 Curtis Floyd Price, an Aryan Brotherhood hitman who was one of two Humboldt County men sitting on California's death row, died in custody early this morning, according to the California Department of Corrections.

According to a press release from the state, Price died of natural causes, though an exact cause of death remains pending, to be determined by the Marin County Coroner.

Price, 74, was convicted in 1986 for the murders of Elizabeth Ann Hickey, who was beaten to death in her Humboldt County home, and Richard Barnes, a witness who was killed execution style in his Los Angeles home after testifying against the Aryan Brotherhood, of which Price was a member. Price was reportedly ordered by Aryan Brotherhood leadership to carry out Barnes' killing, and prosecutors argued he later killed Hickey to prevent her from implicating him in Barnes' murder.

According to a 2006 story in the Times-Standard after Price was stabbed on the yard at San Quentin, suffering wounds to his throat, cheek and head, Price was also accused of killing two fellow inmates while in prison.

While Price had remained on death row, Gov. Gavin Newsom had halted executions during his tenure as governor.

See the full press release from the CDCR copied below:

There are currently 698 people on California’s death row. More information about capital punishment in California can be found here: https://www.cdcr.ca.gov/capital-punishment/