A total of 3,654 people have been deployed from various agencies to work the fires, which now combine to span nearly 380,000 acres, bringing evacuation order sand warnings to nearby communities and a host of impacts as far west as the coast. State Route 299 is still closed in Trinity County with no timetable for reopening and State Route 36 is closed from the junction at State Route 3 to Bowman Road, located about 17 miles west of Red Bluff. Air quality will continue to be impacted by smoke with an advisory in place for communities in eastern Humboldt.

"We do not take this decision lightly and understand how this impacts people who enjoy recreating on National Forests," said Regional Forester Jennifer Eberlien in a press release. "These temporary closures are necessary to ensure public and firefighter safety, as well as reduce the potential for new fire starts." 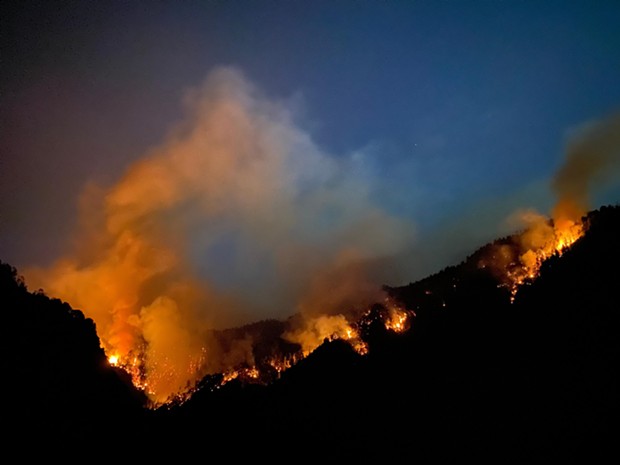 Located a half mile west of Big Bar along State Route 299 east of Willow Creek, the Monument Fire was sparked by lightning on July 30 and saw modest growth of about 2,000 acres yesterday. "A blanket of smoke and light winds over the fire the past several days has kept fire behavior docile for the most part but there is potential, given the extremely dry conditions, for the fire to become more active when the smoke cap lifts," a morning update states. "Fresh air could energize the fire and increase the likelihood of spot fires. Resistance to control remains high as fuels continue to be critical dry." Fire crews are working to hold containment lines protecting Hawkins Bar and Trinity Village to the northwest, Hyampom to the south and Weaverville to the fire's northeast, while crews also worked to help advise residents on how to best prepare their properties. While the forecast calls for a calm winds and a blanket of smoke throughout much of today, which would suppress fire activity, gusts of up to 20 mph are possible this afternoon and evening through the Trinity River Basin. "It doesn't take much wind," Operations Section Chief Karen Scholl said during this morning's briefing. "Any kind of embers outside the (containment) line are going to find receptive fuel beds."

According to CalFire, three structures have been damaged and another 50 destroyed in the blaze to date. Currently, 1,725 people, 24 hand crews, 136 engines, 13 helicopters, 50 dozers and 46 water tenders are allocated to the fire.

While portions of State Route 299 have reopened to allow residents access to their homes, it remains closed to through traffic.

Sparked by lightning July 29 on McFarland Ridge south of State Route 36, the fire is burning in timberlands with fuels with historically low moisture levels in an area that hasn't burned in more than 50 years. Crews continued to gain a hold on the fire yesterday, when it grew little more than 500 acres and containment was increased from 68 percent to 71 percent. "Conditions were favorable again overnight, and crews conducted successful burning operations along Noble Ridge to build containment," a morning update states. "The fire showed little growth overnight and held well on containment lines. The northern edge of the fire has not grown in four days." Today, crews plan to work on constructing a contingency containment line along the northern side of State Route 36, while continuing mop-up and patrol operations. The weather forecast is promising and a smoke inversion is expected to again moderate fire temperatures and growth.

A damage assessment team has identified 46 structures — including 24 residences — that have been destroyed in the blaze, with another damaged. Currently, 895 personnel, 18 hand crews, 69 engines, seven helicopters, 45 dozers and 20 water tenders are allocated to the effort.

Evacuation orders are in effect for portions of Shasta and Tehama counties, but not Humboldt.  State Route 36 remains closed from the junction of State Route 3 to 9.2 miles east of the Shasta-Tehema county line. Find the latest information here and view a map of the fire's footprint here. Located in the Salmon/Scott River Ranger District of the Klamath National Forest, the complex consists of multiple lightning fires sparked in dry timber and brush on July 30. The full complex, which saw only modest growth yesterday, stretches 86,000 acres and includes 22 fires, six of which have been fully contained. "Favorable weather, higher humidity and smoky conditions will result in moderate fire behavior over the River Complex today," a morning update reads. "The Cronan Fire currently has wireline around the entire perimeter and crews continue to monitor and patrol for hot rolling material across Sawyers Bar Road and spots across the 21 Road on the western edge of the fire." Crews plan to spend today strengthening contingency lines, doing mop-up patrols and implementing structure defense plans in fire-threatened areas. 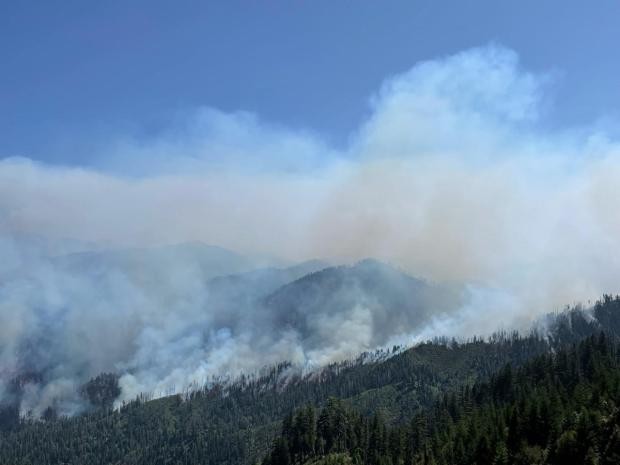 Sparked by lightning on July 31, the McCash Fire is burning near Somes Bar in the Marble Mountain Wilderness in Siskiyou County in an area of timber growth with an understory of tall grass and brush. It grew by about 2,000 acres Monday, but some of that was attributed to more accurate mapping rather than fire growth. "Firefighters continue to work night and day to protect structures along the State Route 96 corridor, specifically in the Ti Bar and Patterson areas," a morning report states. "Today, one engine will move from the structure protection group in the Ti Bar and Patterson area to begin assessing structures in Cottage Grove. This is a precautionary measure only." The fire's western flank is forecast to remain blanketed in smoke today, suppressing fire activity, though clearer skies on its eastern flank could prompt growth there.

Evacuation orders and warning are in place for areas of Siskiyou County. Visit the county's website for up-to-date information here.)

A total of 367 people are currently allocated to the fire suppression effort.


Travel
State Route 299: Closed from 1.7 miles east of Hawkins Bar to 2.7 miles east of Junction City. There is currently no estimated time for when the roadway will be reopened and motorists are advised to use an alternate route.

State Route 36: Closed from the junction of State Route 3 to east of the Shasta-Tehama County Line at Vestal Road. Motorists are advised to use an alternate route.

In Humboldt County, conditions are expected to be "good" and "moderate" in Eureka (from Scotia to Trinidad) and "moderate" into the Garberville/Redway area but with periods of "unhealthy" or "unhealthy to sensitive groups" in Orleans, Weitchpec, Hoopa and Willow Creek.