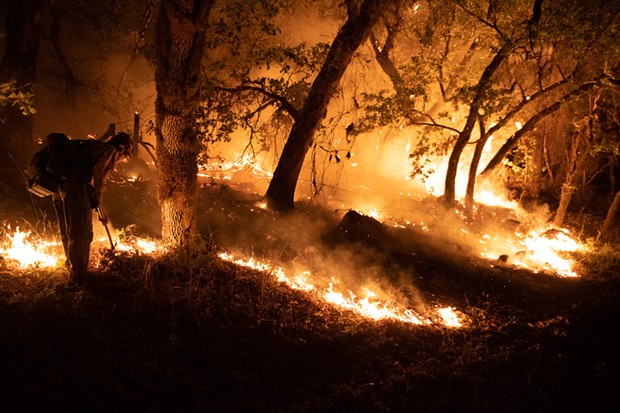 Fire crews continued to make good progress on the Knob and McFarland fires this weekend, freeing up resources to aid efforts on the McCash and Monument fires and River Complex, all of which remain active.

While coastal Humboldt County will see pretty good air quality today, albeit with a "widespread haze," conditions in the eastern part of the county will reach "very unhealthy" and "hazardous" levels.

The Knob Fire burning near Willow Creek started Aug. 29 around 3 p.m. on Brush Mountain and resources from the Monument and McCash fires were sent to aid with firefighting efforts.


A quick initial response and minimal fire behavior in recent days have helped fire crews get a handle on the Knob Fire, increasing containment to 82 percent yesterday, as crews continue to patrol and mop up hot spots within existing containment lines.

"A strengthening high pressure system remains over the area bringing hotter and dryer conditions," a morning update states. "Ridgetop temperatures may reach 90 degrees and humidity will be in the single digits. These conditions, combined with expected wind gusts of 20 mph, have the potential to increase fire activity."


The fire is currently being fought with 222 personnel, 233 engines and two water tenders. Its cause remains undetermined.


The Monument Fire, 183,371 acres, 37 percent contained
Located a half mile west of Big Bar along State Route 299 east of Willow Creek, the Monument Fire was sparked by lightning on July 30.

State Route 299 has reopened but only during the day and with pilot cars leading traffic in both directions from Burnt Ranch to Helena at designated times every hour and a half  starting at 7 a.m. until 7 p.m. The road will be closed from 7 a.m. to 7 p.m. for everyone except local residents with proof of address and emergency traffic.


"As containment increases on the Knob Fire, fire managers will shift firefighting resources to the southwest perimeter of the Monument Fire," a morning update states. "The highest priority will be to secure the containment line along Hyampom Road. Over the next five to seven days, hotshot crews will be conducting firing operations along Hyampom Road in order to reduce the available fuel in front of the advancing fire. The firing operations will intermittently restrict vehicle access to Hyampom."


The fire is currently being fought with 2,053 people, 37 hand crews, 126 engines, four helicopters and 42 water tenders.

The McFarland Fire, 122,653 acres and is 98 percent contained
Sparked by lightning July 29 on McFarland Ridge south of State Route 36, the fire is burning in timberlands with fuels with historically low moisture levels in an area that hasn't burned in more than 50 years.

With the fire nearly fully contained, fire behavior has been minimal, with interior fuels continuing to burn out. Crews continue to patrol all containment lines. A damage assessment has identified 24 residential structures and 22 others destroyed.

Evacuation orders and warnings in Shasta and Tehama have been lifted. The Forest Closure Order for the Shasta-Trinity National Forest remains in place.
State Route 36 is now open from the junction with State Route 3 to 1 mile west of Dry Creek.

River Complex 2021, 121,273 acres, 21 percent contained
Located in the Salmon/Scott River Ranger District of the Klamath National Forest, the complex consists of multiple lightning fires sparked in dry timber and brush on July 30. The full complex stretches more than 120,000 acres and originally included 31 fires, three of which remain: the Cronan, Summer and Haypress fires.


"Fire behavior was active overnight but resulted in minimal fire growth," a morning report states. "As some fires are contained in other areas of the state and nation, those resources are being redirected with many arriving on the Haypress Fire."

Crews dropped nearly 10,000 gallons of fire retardant between the fire and State Route 3 outside of Coffee Creek yesterday. Active fire remains about 9 miles from Trinity Center


Evacuation orders are in effect for Cecilville, Summerville, Petersburg and Coffee Creek Road Past Sugar Pine Trailhead in Trinity County. A warning remains in place for Sawyers Bar, Coffee Creek and Trinity Center. The estimated date of containment is Oct. 1. Find more information here and a map of the fires' footprints here.

The McCash Fire: 57,038 acres, 13 percent containment
Sparked by lightning on July 31, the McCash Fire is burning near Somes Bar in the Marble Mountain Wilderness in Siskiyou County in an area of timber growth with an understory of tall grass and brush continued to grow to the east overnight, reaching more than 57,000 acres.

"The Highway 95 Structure Group worked yesterday with a local firefighting crew to perform mitigation work around cultural sites along the highway corridor," a morning update states. "They will continue this work today. Patrols will also continue along the highway to identify any possible spot fires west of the road. To date, no spot fires have been detected west of the Klamath River or highway."

A cold front is expected to hit the region Tuesday, with a 25-percent chance of rain showers or thunderstorms.


Evacuation orders and warnings are in place for areas of Siskiyou County. Visit the county's website for up-to-date information here.

The fire threatens significant cultural sites for the Karuk Tribe, as well as some structures on private lands. The current estimated containment date is Oct. 31. Find more information here.

State Route 299: Reopened during the day with pilot cars leading traffic in both directions from Burnt Ranch to Helena at designated times every hour and a half from 7 a.m. to 7 p.m. The road will be closed from 7 p.m. to 7 a.m. to everyone except local residents with proof of address.

State Route 36: Open except for in Lassen County where it's closed from Mooney Road in Westwood to the junction of State Route 44.


Wildfire smoke has triggered an air quality advisory — with  "very unhealthy" conditions — in areas of Trinity County and eastern Humboldt County, including Orleans and Weitchpec, according to the North Coast Unified Air Quality Management District.