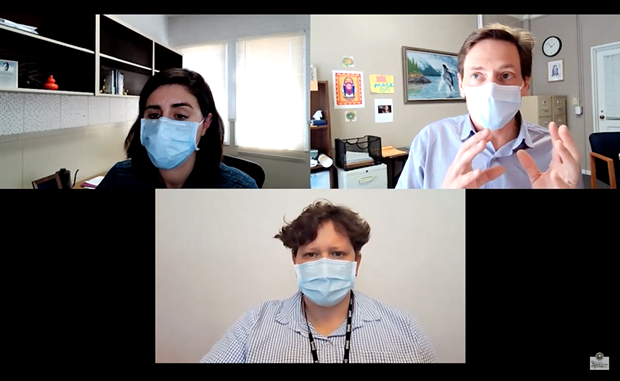 In the face of record case levels and diminished staffing, Humboldt County Public Health is triaging response efforts to focus on contact tracing in schools, skilled nursing facilities and other congregate living situations, as well as continued vaccination efforts, officials announced at a press conference yesterday.

Health Officer Ian Hoffman said that with COVID-19 now endemic in the local community — meaning it is everywhere — traditional contact tracing efforts are no longer an effective strategy to mitigate the disease’s spread. Contact investigations seek to work with people who have tested positive for the virus to track down and isolate those they may have exposed  and end chains of infection. But with so much virus circulating in the local community — and many people simply refusing to participate in contact tracing efforts — officials say the strategy is no longer effective.

“We are beyond the point of trying to contain this,” Hoffman said. “It’s here and it’s going to continue to spread throughout the community.”

As such, Public Health is shifting its strategy and will now simply reach out to new cases electronically with a brief questionnaire via email or text message, preserving contact tracing staff to refocus efforts on at-risk populations.

Specifically, Hoffman said contact investigations will now focus on preventing and limiting outbreaks in schools and congregate living facilities, including the jail and skilled nursing homes, following a statewide trend.

And Hoffman stressed that schools will be a priority in this new approach, calling keeping kids in classrooms “absolutely imperative.”

Hoffman said school staff will remain at the forefront of day-to-day contact investigations, identifying students and staff who have tested positive for the virus, determining close contacts and notifying families. But in situations where there is an outbreak — which the U.S. Centers for Disease Control defines as three cases confirmed in a single setting or cohort over a 14-day period — Public Health staff will work with the school to both mitigate its spread and determine whether there are gaps in the school’s mitigation measures or additional ones that can be implemented.

Public Health has not identified any school outbreaks in Humboldt County to date, Hoffman said, but added “there was kind of a perfect storm” with the convergence of the beginning of the school year and the emergence locally of the highly contagious Delta variant.

“As Sofia mentioned, this is triage,” he said. “Our No. 1  goal is to keep those schools safe.”

Some parents locally have been clamoring for schools and Public Health to release more data about positive cases in local schools, and an online petition asking Hoffman to add school-level case data to the county’s dashboard had gathered more than 700 signatures as of this morning. Asked about the petition yesterday, Pereira said she understands parents concerns and desire for more information.

“First of all, I want to acknowledge the core of what that petition is asking, which is that they want their kids to be safe. Public Health, our schools, we want that as well,” she said. “We want our kids to be able to go to school safely. I’ll just say from personal experience, giving birth and having a child in a pandemic, and raising a child the first year of his life in a pandemic, I know that you would do anything to protect your child. So I understand the desire to know, 'Is it safe for my kid to go to school right now?'”

But when it came to adding the additional data to the dashboard, Pereira said it’s not currently feasible. She said the county does not currently have a uniform reporting structure for all of the county’s 30 school districts and more than 70 schools to report case data to Public Health, though it is working with districts to that end.

“That is quite a challenge,” Pereira said. “I’m not saying that it’s a never, but at this point, with the resources we have, I can’t commit staff to that endeavor. … In terms of adding something to the dashboard, we just don’t have the staff capacity to take that on.”

Hoffman, who has previously said that in-person instruction has shown to be safe as long as mitigation measures like mandatory masking, increased ventilation and physical distancing are in place, said he currently has two children in Humboldt County schools.

“I want to emphasize that I feel safe sending my kids to school in our county because I’ve worked closely with these educators and I know they are following the protocols, they are doing what they can to keep these kids safe.”

In other matters, Hoffman and Pereira said Public Health is continuing its efforts to get more of the local population vaccinated, with Pereira saying mobile clinics remain ongoing, with the goal of providing a regular presence that’s poised to meet residents where they are, when they are ready to get vaccinated. Both said vaccination remains by far the most effective way for individuals to protect themselves from severe illness, hospitalization and death, and to limit spread of the virus in the community.

Hoffman urged residents and community leaders who are fully vaccinated to talk about their experiences with others who have not yet opted to get their shots.

Regarding the county’s dashboard, Hoffman also said the backlog in the reporting of positive cases that occurred a couple weeks back when Public Health switched to an automated system of posting case data from the state’s database has been cleared. Moving forward, he said there may be occasional glitches that cause delays in the reporting of cases but he’s confident Public Health “can provide a fairly reliable number” in its daily case reports.

The full press conference spanned about an hour and can be watched in full below.