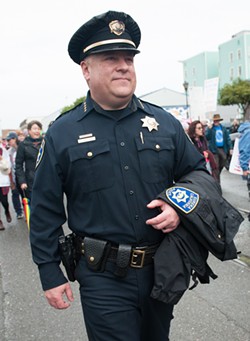 Nearly six months after it began, an outside investigation into misogynistic, dehumanizing, vulgar and violent text messages shared between a unit of Eureka Police Department officers appears to be nearing its conclusion.

“All interviews have been completed and they are in the process of compiling all that information into a report,” Eureka Police Chief Steve Watson told the Journal.

The text messages were first brought to light by the Sacramento Bee, which published a bombshell report March 17 after someone leaked screenshots of the texts to the paper, which were later corroborated through a California Public Records Act request. In the immediate aftermath of the Bee’s report, Watson announced that two officers — Sgt. Rodrigo Reyna-Sanchez, a 22-year veteran of the department who led the unit, and officer Mark Meftah, who joined EPD in 2016 — had been placed on paid administrative leave pending the outcome of the investigation. (While a half-dozen or so officers had been included in the threads, Meftah and Reyna-Sanchez combined to send the vast majority of offending texts.)

In May, Watson confirmed to the Journal that Capt. Patrick O’Neill had also been placed on paid administrative leave pending an investigation, though it remains unclear if it’s related to the texting investigation.

The day of the Bee’s report, Watson announced the city would contract with an outside entity to conduct an objective and thorough investigation and within days the city had hired Sacks, Rickets & Case LLP, giving the firm sole authority in determining the “means, manner and findings related to the investigation,” and giving it “full discretion” to conduct the investigation without the city “influencing or interfering with the outcome,” according to the contract. Todd Simonson, a partner at the firm, has led the investigation. Simonson, who worked as an Oakland police officer while studying for his law degree, has more than 20 years of experience in internal investigations and has represented both accused officers and public agencies trying to fire or discipline them.

According to billing invoices obtained through a California Public Records Act request, Simonson and a colleague — Stephen Chiari — had spent a combined 360 hours on the investigation as of the end of August, billing the city a total of $127,525.

Once the firm’s final report is delivered to the city, Watson said he will review it with the city’s leadership team before determining next steps. He said he recognizes there’s a tremendous public interest in the case but also that the law prohibits him from disclosing most disciplinary actions. The chief said his intent is to make as much of the report’s findings public as the law allows.

“The desire is to be able to tell (the public) as much as we responsibly and appropriately can,” he said.